Residents are renewing calls to close the centre, where there was an outbreak of Covid-19 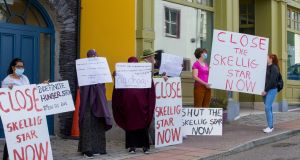 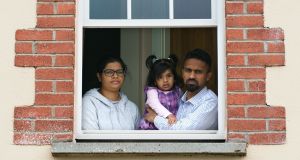 Dozens of asylum seekers staying in a former hotel in Cahersiveen, Co Kerry have begun a protest over “inhumane” living conditions, and are demanding a transfer to more suitable accommodation.

The 30 men and women began a fast on Tuesday morning in the centre, previously known as the Skellig Star Hotel, complaining that “the past and present Government has not done anything to help us from this open prison”.

More than 100 residents – from countries including Somalia, Syria, Morocco, Nigeria, Zimbabwe and Sri Lanka – were sent to the former 56-bedroom hotel on March 18th. An outbreak of Covid-19 occurred shortly afterwards.

“They are really adamant,” local Fianna Fáil councillor Norma Moriarty. “They have no sense of having any control whatsoever over their own destiny or any choice in what happens to them.”

Rooms in the former hotel are smaller than standard-sized hotel rooms and many residents have had to stay inside for significant periods because of the outbreak.

The residents are demanding a move to family-friendly accommodation at direct provision centres in Mosney or Mullingar. A solidarity demonstration was held by locals on Tuesday evening.

Despite the freed up accommodation, she said residents were reluctant to move into rooms where others who tested positive for coronavirus had been staying over concerns about hygiene measures.

Ms Moriarty insisted there were good relations between the local community and the residents, although she said there was no employment for them and some felt it was “a real disappointment” that a hotel was lost as a tourism draw.

“It was a huge asset to cafes, restaurants and bars. It functions best as a short stay hotel, not as a direct provision centre,” she said.

One resident, Azwar Fuard said 25 people quickly contracted Covid-19: “Think of the pressures on our mind, locked in a small room. One by one getting Covid. We suffered for four months in the same building.”

Following the outbreak, the Sri Lankan-born Mr Fuard said they were not allowed out of the building for almost two months, had nowhere to cook and “all the time we have to beg” for basic necessities.

During a boil water notice, residents were rationed to one litre of water per person during day, he said, while children received “chicken nuggets” instead of “proper nutritious” food.

Those in the centre are “already victims of trauma”, he said, including “torture and rape”. Mr Fuard is seeking asylum from persecution and a death threat in his home country. “I came here to live, not to face something like this.”

Fear at the centre is now turning to a second wave of the coronavirus.

“The virus spreading in this building again is a very high chance. We don’t want to take risks here. We want to leave and recover from what we’ve been through,” he said.

The Department of Justice said it is “concerned that any resident would put their health in danger by refusing food.”

On the rationing of water, a spokesman said the centre ran out of bottled supplies on Sunday, July 19th, and that stocks were replenished the following day, adding: “At no time were residents without access to safe drinking water.” Two litres of bottled water is provided to each resident every day, he added.

“They have also been tasked with examining issues raised around provision of meals and any issues arising following the boil water notice currently in place in the town,” the spokesman said. “Any outstanding issues will be followed up for resolution as a matter of priority.”