Organisers ask Taoiseach to allow 500 attend, as was case before restrictions extended 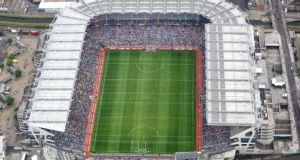 The organisers of the Eid celebration at Croke Park hope 500 people will be allowed attend the event.

Eid celebrations at Croke Park will take place on Friday, July 31st, it has been officially confirmed by the Islamic Centre of Ireland. The date was determined by the Muslim calender based on an official sighting of the new moon on July 21st.

It a statement it said “the Eid Prayer at Croke Park is a highly anticipated and historic event which will reflect the pluralism and diversity of our beautiful country Ireland. As Muslims we are delightful to be able to express our Irish Muslim dual-identity on one of the most important days in the Islamic calendar.”

It said there had been “huge interest from many Muslim brothers and sisters who would like to be part of Eid at Croke Park.” Within two hours of the announcement last week “500 people registered on Eventbribe and more than 500 people also registered their interest on Facebook. ”

However “current Government guidelines do not allow for more than 200 people to gather due to pushing forward the Phase 4 from the 20th of July to the 10th of August.”

The organisers “have written to the Taoiseach requesting a dispensation from this rule as Croke Park is a large venue which can accomodate 500 people outdoors while also maintaining strict social distancing,” and are awaiting a response.

The centre, based at Blanchardstown in west Dublin, said it would be “in contact with all those who registered with us in the next few days to confirm if they will be able to attend on Friday, July 31st, 2020 Eid at Croke Park and abide by the social distancing rules. Those that will, will receive a re-confirmation.”

Shaykh Umar al-Qadri, chair of the Irish Muslim Peace & Integration Council which is organising the event, said “it is one of the first public gatherings of its kind held in Ireland since last March and would be attended by representatives of the Government, ambassadors, as well as Christian, Jewish, and other faith leaders.”

Muslims in attendance “are being asked to bring their own masks and prayer mats,” he said. The event will take place on the Croke Park pitch.

In August 2018 Pope Francis attended the final gathering of the World Meeting of Families at Croke Park and in June 2012 the final Mass of the 50th Eucharistic Congress took place there, with a video address from Pope Benedict XVI.

1 Coronavirus: 396 more cases as public is urged to help protect ‘older and vulnerable’
2 The Sack of Balbriggan: The burning of a town that shocked the world 100 years ago
3 Coronavirus: Germany and Iceland look set to be taken off ‘green list’
4 The billion dollar a month money trail
5 Martin ‘seriously concerned’ at Covid complacency amid pressure over church events
Real news has value SUBSCRIBE