Two thirds of heavy drinkers in denial about their alcohol consumption, study finds 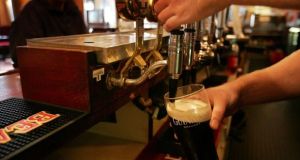 Just 2.4 per cent of people classified themselves as heavy drinkers. File photograph: The Irish Times

Two thirds of heavy drinkers are in denial about their alcohol consumption, with women who drink harmfully particularly likely to see themselves as moderate drinkers, a landmark study published on Thursday finds.

Conducted by the Health Research Board (HRB) and published in the British Medical Journal, the study found just one in three regular binge drinkers were aware of their drinking pattern.

Titled Drinking in Denial, the study draws on interviews with and questionnaires from 7,005 people. It is the first population-wide examination of the public’s perception of their own drinking.

While just over half (51.6 per cent) of drinkers were low-risk drinkers, 97.6 per cent of drinkers classified themselves as “light or moderate” drinkers.

Dependent female drinkers were less likely than males to describe themselves as a heavy drinker (11.4 per cent compared with 18.7 per cent).

“Of those who had a hazardous or harmful pattern of drinking (numbering 2,420), 67.9 per cent were unaware of this and misclassified themselves as being either a light or moderate drinker,” says the report.

And this misperception of their own hazardous or harmful drinking was more pronounced among respondents who were older, less-educated, married, retired or engaged in home duties.

Given the damage over-drinking can cause, “it is particularly concerning that so many Irish people with alcohol dependence believe themselves to be light or moderate drinkers,” say the authors.

There was a need for awareness raising on what constituted a standard drink and what moderate drinking actually meant.

“Our findings regarding awareness of hazardous and harmful drinking are similar to a recent study in Australia, which reported that 68 per cent of Australian drinkers who consume 11 or more standard drinks on a ‘typical occasion’ consider themselves a ‘responsible drinker’.”

The report calls for public guidance on daily low-risk limits.

“In order for individuals to monitor and be aware of their alcohol consumption, knowledge on the standard drink concept and low-risk drinking guidelines is required.

Dr Mairead O’Driscoll, interim chief executive at the HRB said the study underlined the need for further initiatives to reduce alcohol consumption, to clearly identify harmful-drinking and to raise awareness about its impact.

Infant hurt after scrambler crashes into stationary quad in Dublin 09:40
Coronavirus: Dublin hospitals under ‘significant pressure’ as county set for Level 3 09:04
Trump envoy to Northern Ireland warns against hard border 08:48
Man due in court over robbery of wheelchair user in Cork 08:06
Number of H1 grades would have been ‘untenable’ without standardisation - Foley 06:27