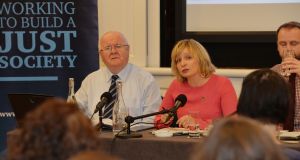 A supplementary budget will be necessary to protect the most vulnerable in the event of a hard Brexit, Social Justice Ireland has warned.

In its analysis the think tank said Budget 2020 had “betrayed the vulnerable and left many further behind”. While most of the poorest had seen no increases in their incomes as a result of the Budget, Brexit would deliver an increase in the cost of living of between €892 and €1,360, per household, per year.

The poorest 30 per cent would be hit hardest, particularly with rising food costs, said the organisation’s chief executive Sean Healy.

“While TDs will see their salaries rise by about €1,600 in the coming year (€30 a week) many of the most vulnerable will see their welfare payments unchanged. Among other things they will face additional increases in the cost of food and higher charges for public transport as a result of the increased carbon tax.

“The choices made by Government in Budget 2020 will mean that vulnerable people will see their standard of living fall and they will slip even further behind the rest of society. This is not acceptable.”

SJI had called for a €9 per week increase in welfare payments to ensure rates kept pace with wage increases. It expressed “regret” there was no increase to core welfare rates and that a recommended 30c increase in the national minimum wage - to €10.10 an hour, has been shelved pending Brexit.

“Despite the necessary Brexit-induced caution we believe the resources to deliver an increase in welfare rates were there.”

There had been “no progress” in addressing poverty among people with disabilities.

“Among people who are unable to work due to illness or disability more than one in three (35.4 per cent) live on an income below the poverty line. . . Budget 2020 did not take the necessary steps to improve services and funding in this area [and]did not move to introduce a cost of disability payment.”

Its call for an effective corporation tax of six per cent, which was based on the “principle of fairness”, was not delivered. This was “regrettable”.

“SJI has continually highlighted the fact that Ireland is a low-tax economy with its total tax-take among the lowest in the EU.”

Mr Healy said the poorest must not be made pay for a hard Brexit adding he would “fight hard” for a supplementary budget to protect this cohort in such an event.