Ireland loses vote in papal elections after only cardinal turns 80 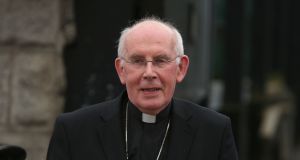 Ireland would have no vote if there was a papal election tomorrow as the Catholic Church’s only Irish-based cardinal, former primate Cardinal Seán Brady, has turned 80 today and, in accordance with Canon Law, may no longer vote in a papal conclave.

He may, however, take part in consultations and discussions prior to or at such a conclave, as did the late Cardinal Desmond Connell at the Vatican in March 2013 when Pope Francis was elected.

As recently as 2009 Ireland had three cardinals. In 2007, then Archbishop of Armagh Seán Brady received the red hat to join his predecessor Cardinal Cahal Daly, who was made a cardinal in 1991, and Cardinal Desmon Connell, then Archbishop of Dublin, who was elevated to the College of Cadinals in 2001.

Cardinal Connell in 2005 became the first Irish-based cardinal to take part in a conclave for 66 years. It saw the election of Pope Benedict XVI. In 1939, then Archbishop of Armagh Cardinal Joesph McRory took part in the conclave that elected Pope Pius XII.

The two men most likely to become the next Irish-based cardinal are the current Archbishop of Armagh and Catholic Primate Eamon Martin and Archbishop of Dublin Diarmuid Martin.

The latter is due to retire in April when he turns 75. However, in 2001 and for the first time since 1885, the Irish red hat reverted to Dublin with the elevation of Archbishop Desmond Connell.

He was 75 a month later and continued as Archbishop of Dublin until April 2004. Archbishop Eamon Martin is 57. When the red hat went to Dublin in 2001, the then Archbishop of Armagh Seán Brady was 61.

Currently there are 216 cardinals in the Catholic Church from 87 countries, 118 of whom are under 80 and eligible to vote for a future pope.

Of those voting cardinals, 57 have been appointed by Pope Francis, 44 by Pope Benedict XVI and 18 by Pope John Paul II. By the end of this year there will be just 114 cardinals eligible to vote in a conclave.

Pope Francis has deliberately shifted the College’s makeup, with fewer cardinals coming from Europe and more from the Americas, Africa, and Asia.

Altogether he has created 75 cardinals (two of whom have died) from 50 countries, 15 of which never had a cardinal before. This includes Sweden’s Cardinal Anders Arborelius, the first Scandinavian cardinal since the Reformation.