Kate Holmquist: ‘A rule-breaker, trail blazer and a woman ahead of her time' 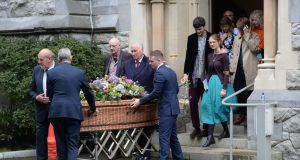 The late Irish Times journalist, Kate Holmquist has been remembered as a writer of “enormous talent and creativity” whose work was “a road map of Irish life for 30 years”.

Hundreds of mourners attended a humanist ceremony held in St Paul’s Church in Glenageary, Dublin, on Friday to celebrate the life of the 62-year-old journalist and author who died last weekend.

Many of those present wore brightly coloured clothing and carried a single flower to remember the American-born writer as requested by her family.

The celebrant of the service, Susie Kennedy, said that although she had never met Ms Holmquist she was familiar with her writing and felt a certain affinity with her as a fellow artist and American.

She described Ms Holmquist, who came originally from Vermont in the US, as a woman of enormous talent with a generous creativity “who was always making something”.

Ms Kennedy said the late writer had a brilliant capacity to listen to people and to show great empathy as evidenced in her writing.

“Hers was a life well lived,” Ms Kennedy remarked.

The chief mourners were Ms Holmquist’s husband, Ferdia Mac Anna; her three children, Sienna, Bessa and Finn; and brothers, Steve and Mark who led the writer’s wicker coffin into the church.

On the altar were placed family photos of Ms Holmquist in Ireland and the US as well as a copy of her memoir, A Good Daughter.

In a moving eulogy, Mr Mac Anna recalled how they had met when Ms Holmquist pitched an idea for an article to him when he was editing In Dublin magazine.

As he showed her out of the office, Mr Mac Anna said he asked her if she would like to go to the Trinity Ball.

To much laughter from the congregation he recounted how she had asked whether it was “a professional engagement or social activity”.

Mr Mac Anna said she accepted the invitation and they were married three months later and “went on an adventure together”.

With his voice frequently breaking with emotion, Mr Mac Anna said his wife had saved his life after he had been diagnosed with cancer.

He described her as fearless over her “fantastic attitude” and willingness to approach anyone, with her writing representing “a road map of Irish life for 30 years”.

Mr Mac Anna said his wife had loved working in The Irish Times, particularly with her mentor, Caroline Walsh, the late features editor of the newspaper.

Mourners heard she had left a wonderful legacy of “memories, kids and books”.

In a musical tribute, Bessa sang her mother’s favourite song, Amazing Grace, accompanied on piano by her brother, Finn.

Their older sister Sienna recalled the fun of growing up with a mother who allowed her children slide down the stairs on mattresses at midnight.

Her mother was so creative: when she wasn’t writing she was sewing, knitting, baking or gardening. She was so good at scrabble, her children always accused her of cheating.

Her mother, she said, was “a rule-breaker, trail blazer and a woman ahead of her time”.

“She came to Ireland on a whim. If that isn’t courage, I don’t know what is,” she laughed.

Sienna said her mother’s intelligence was both intimidating and inspiring.

“She was fascinated by people, by all their contrasts and contradictions. She saw beauty in all our mistakes and believed in the inherent goodness of humanity,” she added.

Countless times she was stopped on her way to school by people who just wanted to tell her they had read her mother’s articles.

She had the power to make words bloom just like the flowers in her garden, she added.

Sienna said her mother’s legacy of strength and creativity would help guide her family through their grief.

Ms Holmquist’s younger brother, Steve said he experienced a poignant moment earlier this week in Cape Cod when the area was hit by a tornado.

“It was like when my sister came to visit,” he said. “They don’t name tornados but if they did I think it would have been named Tornado Kate”.

Also in attendance were a large number of colleagues of Ms Holmquist from The Irish Times including former features editor Sheila Wayman, and former managing editor Gerard Smyth.