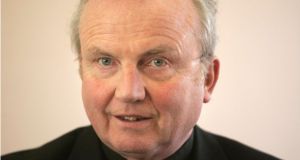 The Catholic Bishop of Derry Donal McKeown has warned there would be “huge anger” over the implications of a no-deal Brexit for his cross-Border diocese.

“We have come to benefit so much from the integration of our economies and social life across the Border here, there would be a huge anger if we were to lose that,” he said.

“Those who are leading Brexit have to recognize not just the benefits for east Sussex but the challenges for west Derry,” he said.

The Catholic diocese of Derry includes much of the Inishowen peninsula in the Republic and other parishes in east Donegal.

In an interview with Vatican Radio, Bishop McKeown said: “Our situation here in Derry on the Border is very special, very specific, because the Border is perhaps two kilometres from my house.

“This diocese already exists both in Northern Ireland and the Republic. It’s a cross border diocese like three other Irish dioceses (Armagh, Clogher, Kilmore) as well,” he said.

His main concern was “about rising tensions, community dissension about the future of the Border, unemployment, lack of hope for young people because we already have a major problem of suicide, particularly among young males. So my concern is purely pastoral,” he said.

“Clearly the situation in London, they don’t see things the way we do.

“For so many years, since the setting-up of Northern Ireland 100 years ago, Derry city has been sitting almost like something at the end of a cul-de-sac, with the Border, a militarised Border behind us, and being able to cross what has been a very natural hinterland route into Donegal for us has come as a great relief.

“It brought tourism. It’s, in many ways, reintegrated the economy across the Border that touches us so closely here.”

'Hope for the future'

On likely effects of a hard border after Brexit, he said: “The benefits that we’ve had from the Good Friday Agreement, the integration of the economy, the fact that the Border is entirely invisible, the fact that people can feel they can breathe and look forward to the future with confidence, all of that is threatened by a hard border as perceived, especially in the context of a no-deal [Brexit],” he said.

In a week which marks the 50th anniversary of the arrival of British soldiers in the city, Bishop McKeown felt Derry had been “very mature” in how it has marked this and the beginnings of the Troubles there in 1969.

“There has been very little in terms of public celebration,” he said. Derry was a city where, “because of dialogue, especially between churches long before politicians were talking”, there existed a situation where “we want to look back on the past, learn from it and ensure we are creating hope for the future, especially for our young people, and not leaving us prisoners of events that happened half a century ago.”

He believed, however, that while “the war is over, the conflict is alive and well” and involved two competing narratives, unionist and nationalist. He dismissed the view that the conflict was sectarian.

“Obviously the republican movement was not fighting for the glory of the Holy Father or for the Lordship of Jesus, what they were fighting for was a united Ireland and they will continue that struggle to reach what they believe is the only solution to the Northern Ireland situation, ie, reunification of the state on the island.

“There’s a whole series of competing narratives going on and we want to certainly speak out together as churches here to ensure that our young people are not given a destructive narrative about the past which only serves particular political agendas in the present,” he said.