‘They have to face the damage that was done, the suspicion and uncertainty to which it has given rise’ 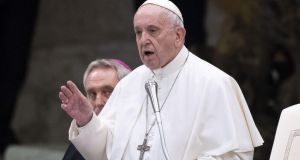 Pope Francis has spoken of the pain suffered by innocent priests due to the Catholic Church’s ongoing clerical child sexual abuse crisis.

“I have seen it in the course of my pastoral visits in my own diocese and elsewhere, in my meetings and personal conversations with priests,” he said.

“Many have shared with me their outrage at what happened and their frustration that ‘for all their hard work, they have to face the damage that was done, the suspicion and uncertainty to which it has given rise, and the doubts, fears and disheartenment felt by more than a few’.

“I have received many letters from priests expressing those feelings. At the same time, I am comforted by my meetings with pastors who recognise and share the pain and suffering of the victims and of the People of God, and have tried to find words and actions capable of inspiring hope.”

The pope said that without “denying or dismissing the harm caused by some of our brothers” it would be unfair not to express gratitude “to all those priests who faithfully and generously spend their lives in the service of others.

“They embody a spiritual fatherhood capable of weeping with those who weep,” he said.

“Countless priests make of their lives a work of mercy in areas or situations that are often hostile, isolated or ignored, even at the risk of their lives. I acknowledge and appreciate your courageous and steadfast example; in these times of turbulence, shame and pain, you demonstrate that you have joyfully put your lives on the line for the sake of the Gospel,” he said.

Pope Francis was speaking in a letter to Catholic priests worldwide which marked the 160 anniversary of the death of French priest St John Vianney, also known as Curé of Ars and patron saint of parish priests in the Catholic Church.

“In these years, we have become more attentive to the cry, often silent and suppressed, of our brothers and sisters who were victims of the abuse of power, the abuse of conscience and sexual abuse on the part of ordained ministers. This has been a time of great suffering in the lives of those who experienced such abuse, but also in the lives of their families and of the entire People of God.

“As you know, we are firmly committed to carrying out the reforms needed to encourage from the outset a culture of pastoral care, so that the culture of abuse will have no room to develop, much less continue. This task is neither quick nor easy,” Pope Francis said.