More than 40% of Dublin homeless accommodated in three areas

Most emergency accommodation in Dublin 1, Dublin 7 and Dublin 8 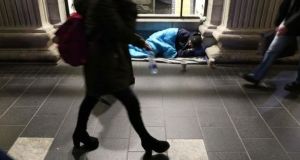 Dublin 1, which covers the north inner city, has the highest number of homeless beds with 1,488 people. File photograph: Nick Bradshaw

More than 40 per cent of the capital’s homeless population is accommodated in three central postcodes, new figures show.

Emergency accommodation in Dublin 1, Dublin 7 and Dublin 8 provides for 42 per cent of homeless people in the county.

There are 24 postcodes in the capital, plus the north and south county postal areas.

Dublin 1, which covers the north inner city, has the highest number of homeless beds with 1,488 people, according to figures obtained by RTÉ News.

The data was compiled from the number of people using emergency accommodation services on March 1st of this year.

Anthony Flynn, independent councillor for North Inner City Dublin, and homelessness activist, said that this is a case of segregation.

“Gardiner Street alone has 138 homeless service units that are registered,” Mr Flynn said. “What we seem to be doing is putting the same sort of units in the same areas and we don’t seem to be spacing it out. We are congesting them in one area of the city - it’s already a case of segregation.”

Mr Flynn said people need to move away from the “not in my backyard” mentality to rectify the issue of segregation and isolation of homeless services.

“We’re not using Ballsbridge, or areas such as D4 for homeless service units. We have a not in my backyard approach from specific areas. We need to shake off this approach, and we actually have to start building social and affordable housing,” he added.

By contrast, three areas in Dublin - Dublin 6W, Dublin 16 and Dublin 13 - have no emergency accommodation beds.

Almost 70 per cent of all homeless children in the capital are being accommodated in private emergency accommodation or hotels and B&Bs, the figures show.

Dublin 1 has the highest number of homeless children with 694. Of those, 422 are in private properties, 234 are in supported temporary accommodation and 38 are in hotels or B&Bs.

The postcode also has 52 individuals staying in the Merchants Quay Ireland night cafe, an emergency shelter.

Merchant Quays Ireland, a homeless and drugs charity, said that the factors leading to homelessness are “complex” and that “every situation is unique”.

“Homelessness tends to be concentrated in cities for a number of reasons. At the moment, one of the key drivers of homelessness is the high cost of accommodation, and this is particularly true in Dublin,” a spokesman said.

“People experiencing homelessness also face heightened health issues compared to the general public, and as a result need to be close to support services, which tend to be located near the city centre.”