Inquiry report into mother and baby homes may be delayed 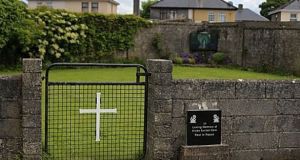 At Tuam the fifth interim report found that scientific analysis on underground chambers 'suggests that at least some of the chambers in which human remains were found were at some stage used to receive sewage'.

The document is on schedule to be presented to Government on February 18th next, said a spokeswoman. But another factor which could stall its publication is a possible general election next month, followed by extended negotiations afterwards on the formation of a new government.

The report will be received by Minister for Children Katherine Zappone next month. But publication is not expected to take place for sometime afterwards as the report is understood to be exceptionally lengthy and will require time for consideration by Government prior to publication.

Announcing establishment of the commission in February 2015 then taoiseach Enda Kenny said it would report within three years. But it requested and was granted two extensions of one year in each case, finally announcing in January 2019 that its report would be presented to Government next month.

As with the Commission to Inquire into Child Abuse, the mother and baby homes commission has two “arms”: an investigation committee, and a confidential panel where people could speak in confidence of their experiences in relevant institutions.

What homes are under review?

Where the mother and baby home at Tuam was concerned, it found that scientific analysis on underground chambers there “suggests that at least some of the chambers in which human remains were found were at some stage used to receive sewage”.