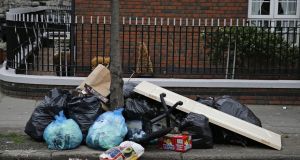 Some of the most disadvantaged parts of towns and cities had the worst litter last year, with Dublin’s north inner city the worst affected, a report published on Monday finds.

The annual review by the Irish Business Against Litter (Ibal) group finds Kilkenny city the cleanest of 40 towns, cities and urban areas surveyed, followed by Killarney in Co Kerry, Swords in Co Dublin, and Newbridge and Leixlip, both in Co Kildare.

However, there was a “glaring disparity” between the high cleanliness levels in some tourist and shopping streets and those in some of the poorest parts of the same urban regions, the report says.

Galway, as it begins its year as European Capital of Culture, is the second-cleanest city , just ahead of Waterford. Galway’s city centre is among 12 areas deemed “cleaner than European norms”.

However, Ballybane in Galway city and Ballybeg in Waterford city are among nine areas found to be “moderately littered” – meaning they are below European norms. Also included in this category are Mahon in Cork city, Drogheda, Tallaght, Gorey, and Tipperary, Longford and Carlow towns.

The areas of Galvone in Limerick, Ballymun in Dublin and Cork’s northside were deemed “littered” – meaning they were considerably below European norms – while Dublin’s north inner city was “seriously littered”.

Ibal, which was founded in 1996, finds 14 areas were “clean to European norms”, including Sligo and Monaghan towns, Ballinasloe, and Limerick, Cork and Dublin city centres.

Last year, said Conor Horgan of Ibal, was the first in which all city centres were clean to European norms. However, there had been “little reduction” in litter levels in “disadvantaged city areas”.

An Taisce, which conducts the survey on Ibal’s behalf, echoed the concerns.

“The dearth of clean sites in this area was striking. Dumping was evident in the worst sites – among them Aldborough Place, Crinan Strand, Great Clarence Street north and the railway line, North Strand Road,” it said.

Mr Horgan commented: “Unfortunately, the gap in cleanliness between these neglected areas and the high-profile city centres is not closing.”

Kilkenny was praised by An Taisce for “a superb achievement for such a popular bustling centre. High Street, Market Cross Shopping Centre, the train station and the river Nore walk were all exceptionally well presented and maintained.”

Killarney was lauded for its consistent cleanliness, which was described as “a great tribute to the businesses and community in this busy tourist town”.

Scores in some towns were “brought down” by isolated incidences of heavy littering, said Mr Horgan.

Examples included a blackspot at the Gorey sports and leisure centre car park, where a child’s cot, baby buggy and children’s toys were dumped.

Breaden’s Lane in Longford was “a dumping ground with a shocking level of items discarded”, as was the Courthouse Square car park in Tallaght.

“Perhaps no one item illustrates the link between litter and the broader environment better than the cigarette butt,” said Mr Horgan. “Cigarette filters are essentially single-use plastic which readily winds its way into our sewers and rivers, adding to the problem of plastic pollution, which threatens to see more plastic in our oceans than fish by 2050. Yet every day we see people nonchalantly flicking butts onto our pavements.”