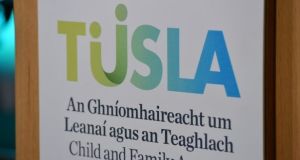 Of 14,177 reports made to Tusla in the final quarter of 2018, social workers decided more than a tenth did not meet the threshold to require making a referral, the meeting heard. Photograph: Alan Betson

Tusla, the State child and family agency, has been returning thousands of child welfare reports made to it by post back to senders with instructions they be resubmitted via an online portal.

Concerns have been raised over the practice by Health Service Executive (HSE) officials as many healthcare staff do not have internet access at work.

Tusla’s service director Linda Creamer told an inter-departmental meeting on May 16th the use of the portal was “low”. It was launched nearly two years ago in January 2018.

“Only half of mandated reports are received through the portal. Those reports that are not made on the portal are sent back with a request to be resubmitted via the portal,” Ms Creamer told the meeting.

“It was clarified that all child protection reports are dealt with immediately but welfare reports are sent back,” the minutes stated.

The inter-departmental group was set up to monitor the progress of Children First legislation and the minutes were released to The Irish Times under the Freedom of Information Act.

Children First came into force in December 2017 and mandates the reporting of concerns to Tusla. Child protection referrals deal with suspected child abuse, where welfare referrals relate to suspected neglect such as a child coming to school with no coat or lunch.

The referrals would include reports of additional alleged abuse of children already known to Tusla, and children referred to the agency for the first time.

Officials from the health service and the Department of Education criticised Tusla’s policy of sending written welfare referrals back to the reporter.

Marion Martin, the HSE lead on Children First, said “it is her understanding that only in the region of 20 per cent of HSE staff have internet access and some staff are not computer literate”.

It “may not be feasible” for healthcare staff to make all referrals online and written reports being sent back by Tusla was “not sending out a very positive message”, she told the meeting.

Schools were identified as another area with low usage of the portal, minutes show. Ms Creamer told the meeting “there may be issues with access or some further training may be required” on how to use the new system.

In a statement, a Tusla spokeswoman said it was not “written policy to send postal welfare referrals back” to be resubmitted online, but the agency were “actively encouraging” use of the portal.

When all referrals come in they are screened and any reports “that require immediate response are acted on immediately”, the spokeswoman said. The move to the online portal was to increase compliance with data protection laws and to collect better statistics, she said.

Moira Leydon, assistant general secretary of the Association of Secondary Teachers Ireland union, said Tusla’s “bureaucratic reply” of sending postal referrals back was giving “a terrible message to schools”. The requirement to submit referrals online was not widely known among teachers, she said.

“This can only increase the cynicism that schools feel towards Tusla,” she said. The union official questioned “what is happening with the child” while the referral is being posted back and forth between Tusla and the school.

The May meeting also discussed an audit of referrals which found problems such as insufficient one-line welfare referrals being made to Tusla.

Of 14,177 reports made to Tusla in the final quarter of 2018, social workers decided more than a tenth (1,935) did not meet the threshold to require making a referral, the meeting heard. Some 27 per cent of these were from the education sector and 22 per cent from HSE staff.