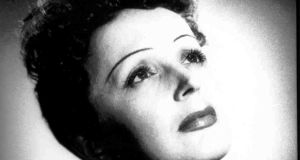 Édith Piaf: a woman of faith

Édith Piaf, the singer-songwriter, was one of France’s best known international stars of the mid-20th century and her talents are celebrated to this day.

She had a tough life. Her mother, a café singer, abandoned her at birth, and she was taken in by her grandmother, who reared her in a brothel. She was temporarily blinded aged three as a complication of meningitis. She later joined her father, a circus acrobat, and accompanied him while he performed. She then sang in the streets of Paris, earning a meagre living until she was discovered in 1935 by a cabaret owner and her professional future was quickly assured.

Her personal life was always a mess, with unstable relationships complicated by drug and alcohol addiction, and sadly she died at the young age of 47.

It is said that her music was autobiographical and therefore it is surprising that one of her most successful songs was “Non, je ne regrette rien” (No, I do not regret anything).

It is difficult to imagine how she or for that matter anyone looking back over their lives can have no regrets for things they got wrong.

So, as we turn to a new year it might be good reflect on past failures, especially the deep hidden ones we find it difficult to think or talk about.

People of faith find relief by focusing on their understanding of God.

Psalm 139 reminds us that we cannot hide from God. “You have searched me, Lord, and you know me . . . you are familiar with all my ways. Before a word is on my tongue you, Lord, know it completely.”

That could be unsettling if we fail to understand the nature of our relationship with God as explained here by Fr Richard Rohr: “The great thing about God’s love is that it’s not determined by the object. God does not love us because we are good. God loves us because God is good. It takes our whole lives for that to sink in, along with lots of trials and testing of divine love, but that’s not how human law operates. Human love is largely determined by the attractiveness of the object. When someone is nice, good, not high maintenance, attractive physically, important, or has a nice personality, we find it much easier to give ourselves to them or to ‘like’ them . . . Divine love is a love that operates in a quite unqualified way, without making distinctions between persons and seemingly without such a thing as personal preference. Anyone who receives divine love feels like God’s favourite in that minute. We don’t even have the capacity to imagine such a notion until we have received this. Divine love is received by surrender instead of any performance principle whatsoever.”

Tomorrow’s gospel reading reminds us of the ruthlessness of the world when it comes to dealing with those who in the eyes of men don’t measure up. Joseph is told to run for his life because the infant Jesus is deemed unwelcome and unacceptable.

The epistle reading is a challenge to endure and to put our trust in the one for whom and through whom all things came to exist, a point developed in the appointed psalm 148.

One of Édith Piaf’s lesser known songs includes the words “Mon Dieu, (my God) mon Dieu, mon Dieu,/ May be I’m wrong/ But you must hear I cry.” It is said that she never went on stage without her cross necklace because she was a woman of faith, strongly influenced by the fact that her sight was restored to normal following a pilgrimage to the shrine of Saint Thérèse of Lisieux. So despite “Je ne regrette rien” she knew that whatever course her life followed God never ceased loving her. What was true for her is true for all of us.