Archbishop calls for alliance to combat ‘the right’

Increasingly hatred, racism, and a creeping anti–Semitism, are part of this world 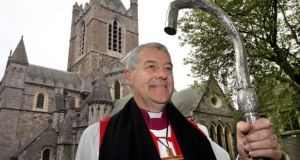 Archbishop of Dublin Michael Jackson: Politics and their cruelty are part of our adult life and they affect children and young people. Photograph: Matt Kavanagh

A senior Irish Church figure has called for “courage and compassion” towards secularism as society faces “increasing pressure from what we ominously call: the right.” He also called for secular and religious people to unite around what they agree, climate change and the environment.

Church of Ireland Archbishop of Dublin Michael Jackson noted how in both parts of the island people “live in comprehensively secular states”.

In both, “what we need right now is a new sense of courage and compassion towards a secularism that is in difficulty today. It safeguards the human rights of which we are all beneficiaries and it is under increasing pressure from what we ominously call: the right,” he said.

He continued: “The right brings with it an exclusionary interpretation of society along with the ugly fist of racism. Across Europe it is all too attractive. We need to move out of a cosy paralysis of stand off.”

Religions “who have had power and control for a long time have been slow to relinquish it and humility does not appeal. Secularism responds to religion with a negativity that does not make dialogue easy; and to its visible decline with an entitlement of philosophical superiority,” he said.

The one thing “that can and must bring both sides together is climate change and the environment. It is surely amazing that the prophetic mouthpieces of this agenda are Greta Thunberg and Pope Francis, one thoroughly secular, one thoroughly religious. The time has come when the two sides need one another,” he said.

“Politics and their cruelty are part of our adult life and they affect children and young people – through trafficking, through mutilation, through poverty and through homelessness; we cannot unsee what we see. But increasingly hatred and racism, and a creeping anti–Semitism, are part of our total and globalised world,” he said.

Referring to the Nativity story, he said “we have no idea of the religious affiliation, if any, of the anonymous innkeeper – and so many of the most helpful and graceful people in The New Testament are anonymous. What is more, they were not in fact Christian, nor could they have been. Jesus Christ was born into a secular and a multi–faith world.

“As we in the Church of Ireland set out to chart a course in the 150th Year of Disestablishment and as we seek confidence to be free to shape our future, we can build only through partnership with those whom we know and with those whom we do not yet know. And we need to get to know them in their difference and in their distinction.”