Conscience in the Catholic Church is supreme, above teachings of Pope and bishops 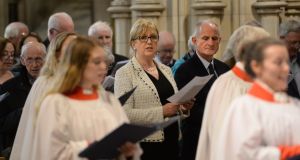 Former president of Ireland Mary McAleese last Thursday returned to old habits, becoming once again the interviewer that she was during her TV career rather than the one answering the questions.

Al Qubaisi is the first such female leader in the entire Arab world and speaker and president of the UAE’s National Federal Council, as the university’s chancellor and Mrs McAleese’s husband, Dr Martin McAleese, put it.

Following the conferring of DCU’s highest honour – a Doctorate in Philosophy – she was interviewed by the former president. Later, both were surrounded by well-wishers.

Speaking afterwards to The Irish Times, however, Mrs McAleese quickly returned to being the one to answer questions, rather than ask them. And she was not short of things to say.

On Taoiseach Leo Varadkar’s apology on behalf of the State last Tuesday to gay men criminalised for their sexuality, she was unequivocal. “I just feel so almost extravagantly grateful that I’ve lived long enough to see these changes that we sought, come about,” she said.

It had been a long haul, she agreed. “For well over 40 years. I first joined David Norris to found the Campaign for Homosexual Law Reform back in the late 1970s. So yeah, 40 years of it,” she said.

In her case, the journey began earlier, in the early 1970s after she had spent a summer working in San Francisco which piqued her already growing interest in human and civil rights.

“One of the best friends I made there was a gay man, a great, great friend and one of the most gorgeous people I ever met in my life. And I have to say what he told me about his life just devastated me.

“I had no experience of it, I knew nothing about it and something just solidified in my mind that if I could do anything at any time in my life to help people like him, who I knew must live in my country but were so secret and so private and so overlooked and neglected, that I would do it.

“And then David arrived in my office one day with this idea for forming a campaign for gay rights and we talked it through and that was the start of it, to put focus on it, to put shape on it and it was brilliant.”

Next Saturday she and the family will be taking part in the Dublin Pride Parade. “We are going to walk under the BeLonG To banner and I think [Minister for Children and Youth Affairs] Katherine Zappone is going to join us, which is wonderful, and our own family, the members of our own family, straight and gay, young and old, we’ll all be there.”

She voted Yes in the recent Eighth Amendment referendum. “I did eventually because I thought about it long and hard, really long and hard.” The death of Savita Halappanavar in 2012 was a major factor.

“I felt very strongly then particularly when her father and mother spoke and when I read the document investigating the circumstances of her death which so strongly implicated the Eighth Amendment,” she said.

“When I heard people like the current Master of Holles Street, the former master of Holles Street, who deal with this stuff every day, saying that the law we’d given them wasn’t working, that they couldn’t work it to save women’s lives, I just felt no, we can’t justify that. So that turned into my Yes vote.”

During her time as president, Mrs McAleese had met Savita Halappanavar. “I think she might have been a dental student because it was at a student event in the RCSI. It was a multicultural event for all the students from all over the world.” She was “a beautiful girl”.

Mrs McAleese, who has clashed with the Vatican about its attitudes to women, will not be attending World Meeting of Families events in the RDS in Ballsbridge next August.

“No. I won’t because, unfortunately as an event, looking at the Pastoral Congress for example, and I’m sure people will enjoy many aspects of it and have opportunities to hear things they wouldn’t otherwise hear, but it’s not a discussion forum.” Since 1994 when the first World Meeting of Families was held in Rome, she has never attended any of the gatherings: “It is a forum really for the reinforcement of orthodoxy.

“You know, really, they allowed it to become a political rally rather than a religious and spiritual experience. So, no, I won’t be going,” she told The Irish Times.

In her completed doctoral thesis, yet to be defended before a team of academics, she has criticised infant Baptism as enforced membership of the Catholic Church which is in breach of fundamental rights.

She has described such children as “mainly infant conscripts who are held to lifelong obligations of obedience”. According to church teaching, Baptism gets rid of original sin and the child becomes a member of the Christian faith.

“These are spiritual things,” she said. “But there’s another side to that, that is often missed and it is that if your parents are Catholic and you are baptised in a Catholic Church, that baby becomes a member for life – according to the teaching of the church – of the church and it has rights and obligations.

“Well, you can’t impose, really, obligations on people who are only two weeks old and you can’t say to them at seven or eight or 14 or 19 ‘here is what was contracted, here is what you signed up to’ because the truth is they didn’t.

“Parents can guide and direct them but they can’t impose, and what the church has failed to do is to recognise that there has to be a point at which our young people, as adults who have been baptised into the church and raised in the faith, have the chance to say ‘I validate this’ or ‘I repudiate this’,” she said.

“You and I know, we live now in times where we have the right to freedom of conscience, freedom of belief, freedom of opinion, freedom of religion and freedom to change religion. The Catholic Church yet has to fully embrace that thinking,” she said.

On the role of conscience where a Catholic is concerned, she said, “I think it’s very simple. My human right to inform my own conscience, my human right to express my conscience even if it is the case that it contradicts the magisterium [the Church’s teaching authority, ie Pope and bishops], that right to conscience is supreme.”

Another problem the church has yet to deal with was “that tension between a fully informed conscience that disagrees with the magisterium”.

She continued, “Let’s be frank about it, very little of the magisterium – there are elements of it that are obviously infallible, things like the teaching on Christ and his divinity – but there are other things that over many, many centuries were taught with great passion that quietly now have been abandoned by the very magisterium that taught them.”

On this subject, in a recent address, she said it was the case that “some prefer to ignore the historical truth that the church has often backed itself into untenable doctrinal positions, taught them for decades, even centuries, only to quietly reverse out of them, usually without apology.

“Galileo is only the tip of a very large iceberg. We do not have to go too far back to trip over some of the more egregious examples. In 1930 Pope Pius XI described the advocates of the emancipation and equality of women as ‘false teachers’. ”