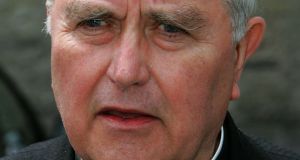 A diocesan bishop for 30 years, he died on Friday in the Letterkenny University Hospital in Co Donegal, a statement by the Catholic Church said.

Following his death, Bishop of Derry Donal McKeown said: “Even though Bishop Séamus Hegarty had been in declining health for a number of years, it was with sadness that I heard about his death.”

“Bishop Séamus had an impressive dedication to his role as a priest and bishop, with a special expertise in education. His concern for Irish emigrants around the world was constant and heartfelt.”

Primate of All Ireland Archbishop Eamon Martin also said he was saddened to hear of Dr Hegarty’s death.

“ He was an active member of the Commission for Education in NI and on the Council for European Affairs, but what stands out is his dedication to the plight of Irish emigrants and their families, and his response to Irish prisoners overseas,” the Archbishop said.

Dr Hegarty graduated in Celtic Studies from Saint Patrick’s College Maynooth and was fluent in Irish, English and German. He was ordained to the priesthood on 19 June 1966.

Dr Hegarty submitted his resignation in 2011 because he was no longer able to fulfil his role as diocesan bishop due to “a condition which is, unfortunately, irreversible and progressive”.

During his time as a bishop, he was the chairman of the Council for Emigrants of the Irish Bishops’ Conference and often expressed concern for the welfare of undocumented Irish emigrants in the US.

In 2011, he was criticised in a report by the church-established National Board for the Protection of Children in the Catholic Church for his handling of allegations of clerical abuse during his term as bishop.

Following the publication of the audit reports, Dr Hegarty said he was “deeply sorry” that anyone was hurt through his management of allegations historically.

In a statement at the time, he said: “Both the Derry and the Raphoe reports indicate deficits in the management of allegations historically, including during my time as bishop. These deficits cannot be undone and, at the personal level, I am sorry that this is the case.”