‘It’s more than just a nightlife venue. It’s a genuine artistic and creative hub, with a social purpose’ 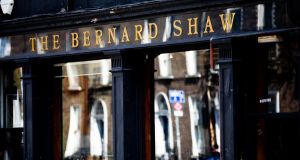 The Bernard Shaw: Bodytonic said it would be closing the pub at the end of October. Photograph: Tom Honan /The Irish Times

The planned closure of the Bernard Shaw pub and venue in Portobello, Dublin has been greeted with shock, sadness and as an indication that Dublin is changing – though not for the better.

Operating since 2006 in the former Bambrick’s pub on Richmond Street, it has since served not only as a watering hole but also a hub for those interested in food, the arts, live music and flea markets.

Finnola O’Driscoll, an office worker having lunch in the Bernard Shaw on Tuesday, said: “It’s more than just a nightlife venue. It’s a genuine artistic and creative hub, with a social purpose.”

Bodytonic, which operates the Bernard Shaw, a brewery, festivals and a number of bars and eateries in central Dublin and elsewhere, said on Monday that it was with a “heavy heart” it would be closing the pub at the end of October.

“We’ve tried really hard over the last few months to renew the lease, stay on longer, or buy the place. A lot of things didn’t go our way over the last 12 months either, but it’s out of our hands now unfortunately,” it said in a statement.

The exact reason for the closure remains unclear. However, the sites immediately adjacent to the pub are vacant and customers speculated that given significant development going on in the area, particularly restaurants and hotels, it would be a prime site.

Bodytonic did not return calls on Tuesday and a spokeswoman said there was no plan to elaborate on the statement.

The building, dating from 1859, is a protected structure. Temporary planning permission was granted in 2008 for smoking area adjacent to the pub, which in 2011 was changed into an open-air beer garden and dining area. Dublin City Council last year granted permission for the beer garden, dining area and Big Blue Bus Pizza Kitchen for a further three years.

However, this was overturned by An Bord Pleanála which decided the yard would likely delay the regeneration of the area and refused permission.

Brian Walton (32) was among those on Tuesday saying businesses like the Bernard Shaw should be protected.

“It’s not just any commercial business. It gives Dublin charm to have diverse different places that aren’t the same. It feels like the Government wants everyone to drink in a Wetherspoons.”

Emer Ramsden (76) from Ranelagh, who was passing with her dog Rua, was “shocked and horrified”. “Dublin City Council is allowing my city to be destroyed. As far as I can see it’s all to accommodate tourists but what are the tourists going to see when they are in all these modern hotels?”

Gareth Cooke (22), who was having a drink with Nicole Mather (22) in the Bernard Shaw, said: “It feels like Dublin is becoming a lot more sterile. Places like Hangar, District 8 and now the Bernard Shaw are closing down.”

Ms Mather added: “It’s just another sign the city is changing. We can’t live in it, we can’t afford to live in it, and if we do live here there will be nowhere nice like this to go.”

David Owens (61), a store operative, said the bar had been a place for cultural initiatives. “For many years this street was a bit dilapidated and it gave a bit of a buzz to it. It’s sad to see it close.”

Shane Nestor (51), an acting teacher, was working in his laptop and said: “It would be a shame if everything gets wiped out around this area... It’s good to see some sort of development going on but at the same time you’d hate the area to lose its bit of character. Things are becoming a bit blander and more structured and personalities get driven away.”

“Recent office, hotel and student accommodation construction in the city has invariably been on long-standing, unsightly vacant sites. They have not resulted in the wholesale displacement of socio and cultural uses as stated in some media,” a spokesman said.

“Rather, they have contributed to employment and vitality in the city and are part of the rich fabric and character of the city as it evolves.”

1 How fraudsters used lockdown to lure Irish victims into boats and caravans scam
2 Miriam Lord: Minister for Agriculture tries to get himself out of the manure
3 Taoiseach rules out united Ireland referendum as ‘divisive’
4 Barry Cowen tells Dáil he is profoundly sorry for ‘stupid’ drink-driving offence
5 Martin criticises ‘over-focus’ on Border poll ahead of Foster meeting
Real news has value SUBSCRIBE