Petbond, run by a vet, only lists animals from approved breeders and rescue centres 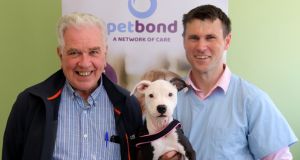 The founder of a new online platform offering members of the public the chance to buy a healthy puppy from approved breeders says he hopes the service will divert people away from the puppy farming industry which has become “out of control”.

Petbond, which is run by veterinary surgeon Tim Kirby and began this week, advertises animals from approved breeders or registered rescue centres who are at least eight weeks old and have been vaccinated and micro-chipped.

The lack of regulation around puppy farming in Ireland means increasing numbers of people are using online forums to find pets, said Dr Kirby, warning that nearly a third of all puppies bought online die or become ill during their first year of life.

“Puppies reared on such farms are rarely vaccinated or micro-chipped,” he said. “They also may not have bonded properly with their mother, and most crucially have not been socialised. Many of these pups as a result become fearful, apprehensive or aggressive, and ultimately abandoned by their owner. The mental toll on people who want to safely source a pet online can be traumatic.

“There is no control over puppy farms in this country, so through our platform we’re diverting the public away from these while working with breeders who want to do this properly.”

The goal of Petbond is to provide a “credible and ethical” service which verifies the background of breeders and how an animal has been treated since birth, he said. Registered pet-rescue centres are also encouraged to promote their pets through the website, which aims to re-home as many abandoned pets as possible.

Dr Kirby has also set up a fortnightly clinic in partnership with the Peter McVerry Trust in Dublin’s north inner city to provide vaccinations and veterinary check-ups for the dogs of homeless people as part of Petbond’s animal welfare “paw for paw” programme.

Under the programme, a free vaccination is provided to a pet in need for every pet safely sourced through the PetBond website.

The powerful bond between a dog and their owner should never be underestimated, said Dr Kirby. “We know that this bond with your dog actually reduces depression and improves your mood. It’s also just the companionship for loneliness. A lot of people we see in here, their pet is the only comfort in their life.”

While owning a dog can complicate the life of a homeless person, as it reduces access to hostels, the companionship it offers is “invaluable”, said Fr McVerry. “There aren’t many homeless people with dogs, but those who do have been coming down here and spreading the word. It’s such an important service because homeless people are very attached to their dogs. Often they don’t have anyone else to be attached to.”