A group of residents being evicted from their South Richmond Street homes in Dublin 8 stage a protest outside the offices of their landlord Val Issuer DAC on Molesworth Street. 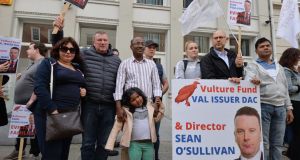 Residents of South Richmond St and Rosedale Terrace demonstrate outside the offices of Val Issuer on Molesworth Street with members of People Before Profit. Photograph: Alan Betson/The Irish Times

Low and middle-income tenants from properties in south Dublin demonstrated on Wednesday outside offices of management companies overseeing efforts to evict them.

About 60 people, including tenants from Grove Park in Rathmines, Richmond Street in Portobello and Rosedale Terrace in Dublin 8 gathered outside the offices of Val Issuer, a subsidiary of international asset management group Maples. Both companies have offices on Molesworth Street.

Val Issuer bought the properties at three locations last year and has issued termination notices to tenants as they plan to refurbish them. Tenants have appealed the notices to the Residential Tenancies Board (RTB) and are being supported by the Dublin Renters Union.

Several notices have been found to be invalid, with the determinations now under appeal.

Many households from the run-down Georgian buildings on Richmond Street have left, though most at Rosedale Terrace and Grove Park remain, saying they are determined to resist eviction.

Rasel Hossain has lived at Richmond Street since 2016. He works in retail and pays €600 a month for a bedsit apartment in bad condition. The termination notice issued to him last November was deemed invalid at the RTB earlier this year. “Now nothing is happening. We are still paying our rent but we are waiting for them to come and try to get us out. But we are not going. This is disgraceful and they shouldn’t do this in Ireland. It is really, really unbelievable.”

Marian Gaule is a neighbour of tenants facing eviction in Grove Park. “I’m here to support them. It’s dreadful what’s happening. It used to be all families. It’s horrendous. Now developers like this come in and families can’t afford to live there anymore.”

People Before Profit TD for Dún Laoghaire Richard Boyd Barrett said large-scale evictions where owners wanted vacant possession to substantially refurbish and then greatly increase rents are “like an epidemic across the country”.

Peter Dooley of the Dublin Renters Union said renters had been “second-class citizens for far too long. We want to see tenants come together, help resist evictions, empower them by standing with them in local communities. The tenants are organising and no one is going anywhere.”

Deputy president of the Union of Students in Ireland Michelle Byrnes said the union backed all tenants facing economic evictions.

“Students stand with those facing evictions. We stand against the life being squeezed out of Dublin city and other cities around Ireland. Students are being squeezed out too . . . We want purpose-built student accommodation by the State on State-owned land,” said Ms Byrnes.

“We did not ask to push out communities in inner-city Dublin. We need to stand united together and fight the Government together. We stand with you in this struggle.”

Maples and Val Issuer were asked for a response to the protest, but did not provide any.