Catholics urged to ‘reflect deeply’ before voting in divorce referendum 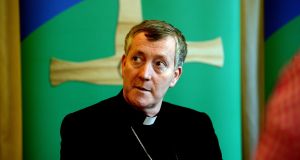 Bishop Denis Nulty: ‘The objective of the proposed referendum is not to support marriage, rather to liberalise divorce’. Photograph: Cyril Byrne

The chair of the Irish Catholic Bishops Council for Marriage & Family has called on people to “reflect deeply on the implications” of the next week’s divorce referendum, saying “the common good would be better served” by supporting and resourcing couples before and during marriage.

Bishop Denis Nulty, chair of the council, acknowledged that marriages did sometimes reach “a crisis point” and that “sometimes, marriage ends in divorce”. However, with courage and support from those around them, it was possible for couples to continue their married life and “even deepen their love”, he said.

“The objective of the proposed referendum is not to support marriage, rather to liberalise divorce,” said Bishop Nulty. “It is imperative that we continue to work together to promote marriage and family.”

He underlined the Church’s belief that the number of marriage breakdowns and divorces could be reduced through introducing socio-economic policies which would support families through long-term education strategies promoting values such as fidelity and commitment. “While this would cost money, the human and economic cost of breakdown and divorce, both for the couple and for their children, is a far greater cost.”

“Our understanding of the church as a ‘loving mother’ and the parish as a ‘family of families’ endorses our pastoral approach as church in accompanying people in the brokenness and pain of their situation,” he said.

Reiterating the words of Pope Francis, Bishop Nulty said people “are called to live their married lives in the reality of the world with all its opportunities and its challenges”.

He added that couples who had attended courses at Accord, the Catholic organisation for marriage preparation and support, had seen real benefits in their marriage and family life.

Bishop Nulty called on the Government to “recommit resources” to marriage preparation and supporting marriage enrichment. “Both initiatives will sustain marriages into the future and lead to great dividends for wider society,” he said.

Under the proposed changes of next week’s referendum, the previous provision that people have to living apart for at least four of the past five years before they apply for divorce will be removed. If the change is approved, the Oireachtas must legislate for the amount of time people will have to be living apart prior to applying for a divorce. The Government has said it will legislate for a two-year minimum.