Voices from the march: ‘If people say enough is enough, change is possible’ 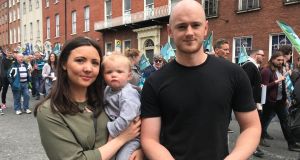 Jade Delaney and Josh Moody – Trim, Co Meath with their children Aria and Zach:
“We’re a young family who are precarious renters and we just want to make our voices heard. We need radical change in the Government’s national housing policy and the way they view housing.

“Housing is being viewed as a commodity rather than a human necessity that everybody needs. We have seen with the Repeal the Eighth movement and marriage equality movement that if people come out and say enough is enough, change is possible.”

“As a young person, I worry about the future. I am lucky enough to be able to live at home but I would not be able to afford to rent in Dublin city and I don’t know when I will at this rate. In your mid-20s, it is expected that you move out of home, get your own place and have some independence but that is being denied to my generation.”

“I’m here today because I think everyone should have a place to live and its a basic human right. I used to live across from the protest where the evictions took place in Dublin city centre last year so I’m fully supportive of the various housing groups that are trying to draw attention to the crisis .

“I’m currently renting in Dublin and I’m in the third house in less than a year because of poor conditions, bad housemates and rent increases. It’s a really scary time to be a renter in Dublin – there is so little housing available, you’re competing with so many people and the future is always uncertain when you do get a place because landlords hold the balance of power.”

“My partner and I own our apartment so we’re here today because we think everyone should have a roof over their head. People who have homes should stand up for those who do not have homes. It is appalling – the housing crisis is one of the biggest crisis we face right now along with climate change.

“We rarely protest but housing is an issue that affects everyone and it has reached a tipping point in Ireland. We have seen with marriage equality and abortion rights what Irish people can do when we all stand up. This is the big social issue of the moment and that’s why I think so many ordinary people are on the street here today.

“I’m here today because as a young person, being able to start a life in Dublin and pay rent should not be out of reach. Young working people should not have to pay 60 to 75 per cent of their income to rent in overpriced, precarious accommodation.

“I’m sick of seeing homeless people on the streets when there is so much money in the country. There is no will or desire on the Government’s part to build public housing or make it more affordable so we need to come together to do something and make our voices heard.”