Abdul Raguaragui whose son Azzam (18) died following a stabbing in Finsbury Park, Dundrum, south Dublin spoke briefly to the media at the funeral of his son at Clonskeagh Mosque. Video: Collins Photo Agency 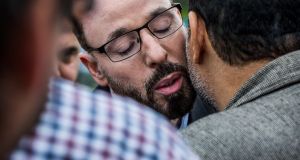 Young Muslims were urged to “do good deeds” and “work hard” at the funeral of Azzam Raguragui (18), at Clonskeagh mosque in Dublin on Friday.

The young man, who was due to sit his Leaving Certificate next month, died after being stabbed at Finsbury Park in nearby Dundrum last Friday.

It is understood he was on his way to evening prayers at the mosque with friends when an argument broke out with another group of young people. Azzam was stabbed a number of times and was treated at the scene by paramedics, before being taken to St James’s hospital, where he was pronounced dead.

He had departed this world “empty-handed”, leaving behind his family and taking with him only the results of how had lived his life, what he had done and what he had said.

Speaking in Arabic, he said: “Young Muslims, don’t waste your time. Work hard and be good in your country and in your nation. Azzam is saying to you, ‘Don’t be deceived by the fact you are young’.”

Members of the congregation were offered headsets through which the prayers were translated into English.

“Here is Azzam, 18 years old and he left everything behind...Death comes all of a sudden. If you really loved Azzam you have to prepare yourself to be in the place Azzam will be. I encourage you to work hard,” the Iman said.

Telling mourners to “leave the matter of Azzam to Allah”, he said: “Allah knows why he took his soul. To Allah we belong and to Allah we must return.”

Azzam’s mother and father had shown “great patience” and the community had trust in the gardaí and the courts “to solve what happened”, he said.

“Being angry will not help. Talking a lot there is no point. Do good deeds and you will be rewarded.”

Members of the Irish Muslim community had travelled from across the country to attend Friday prayers and the funeral prayers. The mosque was full to capacity, in both the men’s and women’s areas.

Before prayers, Azzam’s parents - his mother Hajiba Elouaddaf and father Abderrahmane Raguaragu - and his older sister and younger brother, welcomed sympathisers to view Azzam’s body, which had been shrouded in white cotton and placed in a simple wooden box.

Many children and young people were there, including Adam Adnan (16) who had known Azzam since they were both young children.

“We used to always go on hikes with my dad every week. He was the first friend I ever had. It’s just so heartbreaking that he’s gone. He was like my brother.”

Other young people described him as “such a good person and always smiling”, and someone who “brightened up every room he was in”. He was described as “ambitious”, “a good soul” and “very funny”.

“You always worry about your teenage children [when they go out] but you never think it will happen.”

Supt Martin McGonnell, the Dundrum Garda district officer told journalists at the funeral that gardaí were “following definite lines of inquiry” and hoped to bring charges in the future.

“It is a dreadful tragedy but I think at least the community will back that family up big time and support them through a very, very difficult time not just now but into the future. It is a terrible tragedy but unfortunately it’s happened and we have to deal with the aftermath of it now.”

Azzam was buried in the Muslim section in Newcastle cemetery.

A service for the wider community, including Azzam’s many young friends from across south Dublin, will take place at the mosque on Sunday evening at 6pm.