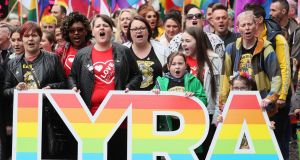 A few thousand people have protested in Belfast city centre to demand the North’s LGBT community have the same-sex civil marriage provision available in the rest of Britain and Ireland.

Before Stormont collapsed in January 2017 five motions had been brought forward to the Assembly on same-sex marriage equality, however, the last vote in favour of extending civil marriage rights to the LGBT community was vetoed by the DUP using the petition of concern blocking mechanism.

Gay and lesbian couples led a Love Equality march and rally on Saturday along side Sara Canning, the partner of murdered journalist Lyra McKee, and their friends.

They carried a Lyra placard in rainbow colours to the rally at City Hall where Ms Canning said she knows the law will change but that same sex marriage equality should not be used as a political football.

“We pay our taxes, we are governed by the same laws, why should we not be afforded the same rights in marriage,” she said.

Rainbow project director John O’Doherty sent a message of solidarity to other campaigners in the struggle for women’s reproductive rights, Irish language rights, and victims rights including survivors of historical child abuse.

“We are not in competition with each other,” he said.

Placards held by protesters chanting demands for “marriage equality now”, included slogans such as “Some people have two mummies”, “Down the aisle with this sort of thing”, “Arlene you can be my maid of honour” and “It’s not us and them it’s just us”.

Anne and Stephanie Laird-Arnold from Killough, Co Down, are in a civil partnership and would like the choice to be married.

“It is important to have that choice,” Anne said.

“It is to let our children know we are no different to anyone else.”

Channel 4 News reported on Friday that a Freedom of Information request revealed that in the last two years the Northern Ireland Office had spent just £318 on advancing LGBT rights in the region.

Love Equality committee member and Rainbow Project Policy Manager Gavin Boyd said he was “appalled and disappointed but unfortunately not surprised” by the derisory sum.

“Every few months the UK government make a song and dance about what they have achieved for the LGBT community,” he said.

“It’s a continual slap in the face, they have done noting to improve the lives of LGBT people in this part of the UK.”

Alliance Party Deputy Lord Mayor of Belfast Emmet McDonough-Brown said: “The words I love you mean the same whether you are straight or gay. So should the words marry me. We can’t wait any longer for people to have their rights delivered.”

Amnesty International spokesman Patrick Corrigan said: “If Stormont is incapable of delivering equality for people here, then it is the responsibility of Westminster to end discrimination against the LGBT community.”