The Government needs to declare a housing emergency, rally in Dublin is told 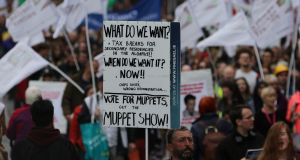 Voters need to punish the Government at the local and European elections on Friday for its inaction on the homeless crisis, speakers at a weekend rally in Dublin declared.

Thousands of people marched through the capital on Saturday over the rising homeless figures and the housing crisis in an event organised by a coalition of trade unions, political parties and community groups.

The latest figures from the Department of Housing show there were 10,305 people registered as homeless in Ireland in March, including 3,821 children.

The protest heard demands to build more public housing, for rent controls and for the right to housing to be formally inserted into the Constitution.

John Douglas of the Mandate Trade Union said people have been “betrayed” by the Government and should be punished by voters at the European and local elections taking place on Friday.

“The Government needs to declare a housing emergency and give people a legal right to a home. The Government’s strategy Rebuilding Ireland is failing and homelessness is increasing. Voters need to send a message loud and clear to the Government this Friday and punish them for keeping the housing crisis going,” he said.

“The Government are putting millions of euro into the pockets of direct provision centre owners and B&B and hotel owners while our own citizens don’t have housing,” said Mr Douglas.

Anthony Flynn of Inner City Helping Homeless and an Independent candidate in the local elections said: “Thousands of people are out marching today because they have had enough of the Government’s indifference towards the housing and homelessness emergency. Protestors are sending a clear message to Minister for Housing Eoghan Murphy, we will not tolerate the crisis you preside over”.

“Since Rebuilding Ireland was introduced over two years ago, rents have increased to a record level and prices continue to increase,” he said.

“The Government’s Housing strategy is not working. A 12-year-old could tell us that. And yet, every month when the homeless figures come out, they keep insisting the strategy is working. The emperor has no clothes and until they realise they have no clothes, nothing is going to change.

“There are at least half a million people in the country whose housing situation is causing them stress - from overcrowded houses to those living in poor quality private accommodation who can’t complain due to fear. There are those in their 20s, 30s and 40s still living with their parents who can’t move out of home and be independent,” added Fr McVerry.

“There are people paying over 60 per cent of their wages on rent to hand over to a landlord. I think Karl Marx would have something to say about that and the transfer of wealth,” said Fr McVerry.

Bulelani Mfaco from the Movement of Asylum Seekers in Ireland criticised the profits being made by private companies from those living in direct provision.

“Direct provision was created 20 years ago and was only meant to last six months but the Government liked it - it would deter people coming to Ireland to seek asylum and it would make a profit for those who run direct provision centres. If you have a struggling hotel, all you have to do is put a family in direct provision there and it will make the owners make thousands of euro per year,” he said.

Orla O’Connor of the National Women’s Council of Ireland said Ireland has the highest rate of female homelessness in Europe.

“We know the devastation not having a home is having on the women of Ireland. This is the equality issue of our day. Not knowing where you will take your children tonight, where are you going to sleep, where are you going to wash, where can your children play or do their homework. This is devastating and it is destroying families,” said Ms O’Connor.

Colm O’Halloran of the Union of Students in Ireland said students cannot afford to rent luxury student residences that are being built and cannot compete with working people to rent homes.

In a statement on the march, Minister for Housing Eoghan Murphy said: “Popular movements are important and bring about change. Four years ago rent pressure zones would not have been possible but today they are not only in existence, but being expanded with all party support.”

He said figures released last week showed a 23 per cent increase in home builds for the first three months of this year.

“I know that is of cold comfort to a family in emergency accommodation or a young couple priced out of the market. But it is evidence that things are moving in the right direction and that our plan to increase supply is having an effect.”

Recovery was “underway”, he said and “Government is doing everything it can”.