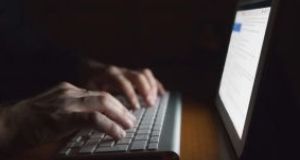 ISPCC: ‘imperative’ that an office of digital safety commissioner be established

Youth information website SpunOut.ie said it has received “a number of reports of sextortion” from young people in the last five months.

Sextortion involves extorting money or sexual favours from someone by threatening to reveal sexual information or images.

Jack Deacon, deputy director of the website, said sextortion and the non-consensual sharing of images is “a hugely pressing issue” and that resources and structures must be put in place “now”.

“SpunOut.ie have had a number of reports of sextortion come through our channels from young people in the last five months, where they have been extorted and pressured into sharing intimate images,” Mr Deacon said on Tuesday.

“One case of a young man detailed how someone he knew had intimate images of him and was asking him for more. He was being threatened that the pictures would be sent to his family and he was afraid that the gardaí wouldn’t believe him. He felt he was in a hopeless situation with no way out.”

A number of youth and children’s organisations came together on Safer Internet Day calling for a digital safety commissioner. These included Barnardos, the Children’s Rights Alliance, CyberSafeIreland, the Dublin Rape Crisis Centre, One in Four, the ISPCC and SpunOut.ie.

John Church, chief executive of the Irish Society for the Prevention of Cruelty to Children, said the office of an online safety commissioner would monitor law reform and put in place appropriate regulations and supports to ensure “children are better protected online”.

“It’s imperative that an office of digital safety commissioner be established and adequately resourced with the funding and staffing it requires to be able to function effectively,” he said.

“So in addition, the office ought to be granted robust powers to sanction companies who do not comply with codes for online safety.”

Mr Church referenced the case of a 14-year-old boy who had called Childline to say he “felt worthless after months of being bullied online about being gay”.

“He said he couldn’t keep up with the bullies and they constantly targeted him through new apps and online accounts,” Mr Church said. “There is hundreds of case studies and examples like that that we hear every single day.”

The organisations have also called for the next government to develop a five-year digital strategy that would provide a “comprehensive” digital literacy programme in schools and youth work settings, and a review of resources needed by gardaí to investigate crimes involving images of child sex abuse.

Suzanne Connolly, chief executive of Barnardos, said for children “there is no difference between the offline and the online world”.

“The next government need to recognise the importance of prevention and early intervention in this context, and the need to empower children and parents through education – it is the key way to helping children be smart and safe, as well as resilient online.”