President donates 700 books from his personal collection to libraries

President Michael D. Higgins is donating his personal book collection to Dublin City Libraries. At an event in Cabra Library he made an initial donation of 700 copies from his collection, which will be added to annually. Video: Bryan O’Brien 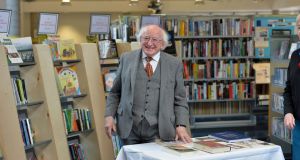 President Michael D Higgins has said that if he was allowed one wish for Ireland’s children “it would be that they would all have access to reading and access to a musical instrument and, possibly, to be able to swim”.

“Then you had the greatest equipment for life,” he said.

Speaking at Cabra library in north Dublin on Tuesday as he donated an initial 700 books from his personal collection to the Public Library Service, Mr Higgins said reading had been very important in his life.

The President said books were “meant to be read”.

“The best place for books is where they will be picked up and read by many people. Our public libraries are a wonderful place for the sharing of ideas, allowing the writers to encourage creativity, and to share the ideas and concepts contained in the books, with their readers.”

Among the books donated to the library service are a number that Mr Higgins bought himself and others received as gifts from authors since he became President in 2011.

A list of the books can be viewed at libraries.ie by searching for ‘The President Michael D Higgins Collection’.