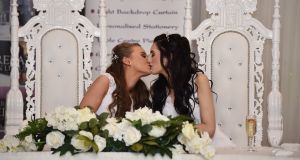 “We are living the dream,” said Sharni Edwards after she and her partner, Robyn Peoples made history by becoming the first same sex couple to be married in Northern Ireland.

After the short marriage ceremony in the Loughshore Hotel in Carrickfergus, Co Antrim on Tuesday afternoon the couple, both in long white dresses, said they would henceforth be known as “Mrs and Mrs Edwards-Peoples”.

Their wedding took place on the sixth anniversary of when they first met at the gay Kremlin pub in central Belfast.

It was something of an accident that they were the first couple to declare their marriage vows in the North as when they got engaged their plan was for a civil partnership ceremony because at that stage same-sex marriage was banned in Northern Ireland.

But since then Westminster introduced legislation to allow such marriages with the result that Sharni Edwards, a 27-year-old waitress from Brighton in England and Robyn Peoples, a 26-year-old care worker from Belfast, made that latest bit of history in a changing Northern Ireland.

It was a solemn and happy occasion for the couple. They even managed to remain composed when posing for photographs from a battery of photographers in the hotel after their wedding.

They held hands, and raised champagne glasses, and kissed for the snappers, and didn’t even complain when some of photographers, searching for the perfect shot, rather rudely instructed, “go again girls”.

‘Love is just the same’

Ms Peoples said their marriage which was attended by about 50 family and friends demonstrated that they were “equal to a man and a woman”.

“Our love is just the same, it’s no different. Sometimes people might try to say it’s not. Our love is the exact same, and this means everything to us,” she added.

“This is my wife, I can finally say she is my wife and we have actually had our marriage,” said Ms Peoples.

Ms Edwards said they “could not be more grateful” that the law was changed and that rather than a civil partnership they could marry. “It’s amazing…it’s completely surreal,” she added.

Ms Edwards said it meant the “absolute world” that they were being seen as champions of the LGBT community in Northern Ireland.

On a number of occasions the Northern Assembly voted by narrow majority votes against same sex marriage. Five years ago, and for the first time, a proposed change to the legislation was passed by just one vote, but the DUP used its blocking veto to prevent the new law coming into effect.

Asked why it took so long to be able to marry Ms Peoples said, “Our politicians. It’s been a religious battle between them, and not really very human .So they sort of battled between each other and it took Westminster to push it forward and here we are, it’s happened.”

They both thanked the different lobby groups such as Amnesty and the Love Equality group who had campaigned for the legalisation of same sex marriage.

Sara Canning, whose partner Lyra McKee was murdered by the New IRA in Derry last April, in congratulating the couple said, “What a wonderful moment in our history. This really means so much and has brought me some much-needed light in what has been a dark year.”

She said Ms McKee would have “been so overjoyed to see this day” while adding, “Of course, this historic moment is a little bittersweet. It had been our dream too. Lyra and I should have been an engaged couple now, planning our own wedding day.

“But I am so happy for Robyn and Sharni, the first couple to marry under the new law. We’ve been in touch in recent days and I’m delighted for them and for all the other couples who will follow.”

“In winning this campaign, we haven’t just changed the law, we’ve changed Northern Ireland for the better,” he said.

The couple are to honeymoon in Cyprus.