Archbishop of Dublin’s criticisms of Maynooth ‘hard to hear’ 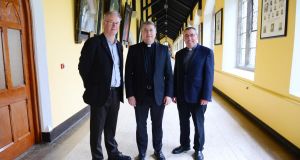 It is said that (mad) King George III remarked, on the opening in 1795 of St Patrick’s College, Maynooth (“a popish college”), that the event grieved him far more than losing the American colonies 20 years beforehand.

As the college, once the largest seminary in the world, prepares for its 225th anniversary next year, some of its most senior figures having been speaking about its future.

Criticisms of the college and its pontifical university – which has the Vatican’s imprimatur to teach theology – by Archbishop of Dublin Diarmuid Martin was “challenging”, Fr Mullaney said.

Trustees of the college include Ireland’s four Catholic archbishops and 13 other members of the Irish Episcopal Conference.

“My experience of him is that he’s a very engaged trustee and when he poses a challenge we have to respond to it. We take whatever he says seriously.”

Repeated criticisms by Dr Martin “can be hard to hear”, said Fr Mullaney. “It can shake you up a bit but that’s no harm either.”

Last August, the archbishop said the seminary was “trapped in an old vision” and asked what role does it play in the overall intellectual ethos of the country.

“A lot of people wouldn’t even know in Ireland that we have a pontifical university. It’s weak in publications,” Dr Martin said.

In 2016, the archbishop withdrew Dublin seminarians from Maynooth because of alleged “strange goings-on” there, and sent them to the Irish College in Rome.

Asked whether Archbishop Martin had been “a thorn in the side” of Maynooth, Fr Mullaney replied: “It’s sometimes hard to hear what he has to say but that has been his key for the Church in Ireland. He’s challenging. He kind of rattles our cages but he’s not someone you can ignore, so you take it seriously and engage with it.”

In 2016, governance at Maynooth was restructured, with the seminary and the Pontifical University separated. Fr Mullaney was appointed president of both.

Rev Surlis was appointed rector at the seminary and Rev Marmion was named Dean of Theology at the Pontifical University. The latter is an entirely separate institution from NUI Maynooth, with which it shares a campus.

Currently there are 33 resident seminarians in Maynooth, with 25 non-resident, these latter belonging mainly to religious congregations. Included are men from Cameroon, Sri Lanka, Ukraine, Croatia and the Czech republic.

The average age is mid- to late 20s. Among the resident seminarians are 13 men who joined last September, representing a 50 per cent increase since last year.

Most of the newcomers would have undertaken a preparatory year, said Rev Surlis. “The bishops are all of one mind that, really, no fellow should be coming in here just straight away having contacted a diocese a couple of months ago and then suddenly be in a seminary in September,” he said.

Where formation was concerned, the college is investigating the various different models that are in operation across the world.

One such model is parish-based, whereby the seminarian becomes involved in the life of the parish itself, working with the local priest or priests.

“Working with the pastoral council, being involved in things like home visitation, baptism preparation, bereavement work, that type of thing,” said Rev Surlis. “So that, over those three or four years they see, in a parish context, what parish life is actually really like.”

He said that over the six to seven years, each of the seminarians will have stage-appropriate pastoral experience “that range from things like working with Fr Peter McVerry” or going to schools or hospitals.

Fr Mullaney said “every guy’s formation programme today is more bespoke. It’s very much tailored to the needs of each fellow.”

They were “moving away from a conveyor belt formation model”, he said.

Where Archbishop Martin’s criticisms of the separate Pontifical University were concerned, Fr Marmion said a lot has been done in terms of organising international conferences.

“And we have been writing books for the academy. We have the Irish Theological Quarterly which is a very reputable journal. I am the editor of it. There’s been 30,000 downloads per year on that.”

Currently there are 652 students at the Pontifical University with 220 full- time students,including 63 post-graduates. “We would take in 40 to 50 each year who do a BA in Theology and the Arts. Maynooth University do the Arts subjects, we do the theology side. We would have at least 150 lay students, with access to a fully fledged university,” Fr Marmion said.

“We’ve a lot going for us, but the archbishop is right in terms of challenging us to go further. I’d like to see us more in public profile, public domain. We’re getting our staff to do more media training so that they are not as afraid as they were to go on radio and TV. People wouldn’t realise we have 15 or 16 full-time people here, and at least five in theology are lay people,” Fr Marmion said.

Fr Mullaney also pointed out that six books associated with the Pontifical University and St Patrick’s College would be launched between October and December this year. “We’re putting all the resources and structures into encouraging and creating the opportunity for staff to take sabbatical leave in order to progress research. A lot of our staff are research active, with publications in periodicals,” he said.

As regards the overall sustainability of Maynooth, Fr Mullaney said it was “healthy” financially.

There was “not one vacant room in this college. The buildings are used as efficiently and as well as we possibly can because we have a number of different constituencies here.

“We’ve the Irish Episcopal Conference here and there’s a lot of their agencies, Trócaire, then Maynooth University and ourselves,” he said.

They had a very close relationship with Maynooth University. “Our main programme is co-delivered with them, and we have very easy access to each other. They themselves would like to expand their footprint on this campus. So we’ve the possibility of expanding their footprint on this campus as well as their very modern campus in the north. We’ve the space to allow that happen as well.”