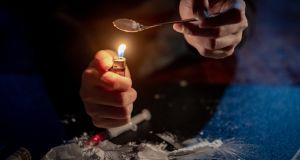 Tim Murphy, the service manager for Cavan and Monaghan drug and alcohol services, said that substance misuse is not just a Dublin issue. Photograph: iStock

Drug addiction services are struggling to cope with the rising demand and are at risk of closure due to a lack of funding, service operators have said.

Speaking at a gathering organised by Citywide, a drug crisis campaign which called on more urgent Government action to tackle substance misuse, workers from drug services all over the country said the prevalence of illegal substances has now reached unprecedented levels.

Susan Collins, managing director of Addiction Response Crumlin, said that the availability and accessibility of substances has changed with the advent of technology.

“The increase in crack cocaine is visible in most pubs and the dealing that is going on, you’re able to see it. There are young people who are being groomed to sell drugs,” she said. “Although it was quick to get drugs a few years ago, nowadays it’s on your doorstep before you even get down to the shops.”

She added: “The drugs issue is getting more complicated. There’s more drugs available, drugs on the internet, there’s drugs on the corner, there’s drugs that can be delivered, there’s so many different ways you can purchase drugs. But the policy or funding to deal with this hasn’t changed.”

Tim Murphy, the service manager for Cavan and Monaghan drug and alcohol services, said that substance misuse is not just a Dublin issue, and that additional focus needs to be placed on rural areas.

“Cavan, in particular, has quite a big opiate problem, heroin problem. There are around 70 people in a local methadone prescribing clinic and there’s more people on the waiting list for the service,” Mr Murphy said.

“In the 10 years that I’ve been there, it has doubled. There are positive aspects to that in that treatment has doubled but it’s not meeting the demand.”

Mr Murphy said he recently wrote to the Minister of State for Health Promotion Catherine Byrne to inform her that they will have to close their service due to overhead costs increasing but funding remains the same.

“Because we have had no funding increase, and we’re looking at rising rent costs and looking at rising insurance costs, we have to make a smart business decision and say that the project is no longer sustainable,” he said.

“We are currently working with the regional drugs taskforce and the HSE about how to wind up operations and minimise the impact on service users, but it’s still going to be significant,” he added.

The Department of Health said there is “extensive community participation and representation” on the local and regional drug and alcohol task forces.

“The task forces oversee an annual budget of €28m from the Department of Health and the HSE. This funding supports over 280 community projects, in local areas and communities throughout the country, to support initiatives to tackle drug and alcohol use and misuse,” the spokeswoman said.