Lay Catholics could soon be officiating at baptisms, weddings and funerals

St Patrick’s College, Maynooth, which was once the largest seminary in the world is about to celebrate the 225th anniversary of its founding. Video: Bryan O’Brien 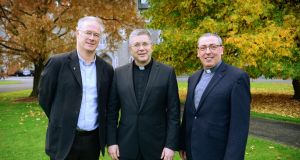 Many Catholic weddings, funerals, and baptisms will be conducted in Ireland in the years ahead by lay men and women due to a lack of priests, senior figures at Ireland’s leading seminary have conceded.

Permission for the changes would have to be sought from the Vatican by Ireland’s bishops, Rev Prof Michael Mullaney, president at the Pontifical University, St Patrick’s College, Maynooth told The Irish Times.

Certain things are reserved for priests, the celebration of the Eucharist and Confession “being the most obvious two”, said the rector at St Patrick’s College Rev Dr Tomás Surlis.

“But there is a whole range in which pastoral outreach takes place that are not necessarily reserved to ordained ministry. In Ireland we have not been good at embracing that reality,” he said.

Fr Surlis and another of Maynooth’s most senior figures, the dean of theology Rev Prof Declan Marmion, said gay men who live a celibate life are welcome in the priesthood.

Rev Marmion said: “I think we all know priests and bishops who are excellent ministers and make a great contribution to the church and society, who are gay but who are celibate. Being frank about it, I think that’s something we shouldn’t be afraid of saying.”

He said Pope Francis does not have problem with gay priests.* “Does he have a problem with deep-seated homosexual tendencies or people supporting and actively involved in gay culture? Yes.” But this view would also apply where heterosexuals were concerned, he insisted.