Movement of Asylum Seekers says: ‘Of course we know direct provision is inhumane’ 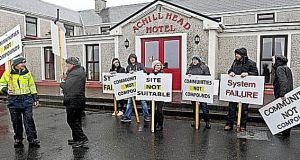 Protesters have been urged to ‘stand down’ and help provide accommodation for asylum seekers. Photograph: Conor McKeown

Recent protests calling for an end to the “inhumane” direct provision system are tainted with “racial undertones” and are actually about race and difference “dressed up in human rights language”, refugee support groups have said.

“Of course we know direct provision is inhumane,” said Mr Mfaco. “The problem is we’ve never seen any of those people protest it before. It’s only when a centre is going to open in their backyard.”

While communities are justified in their concerns around resources, protests are increasingly promoting anti-immigrant messages “dressed up in human rights language”, said Fiona Finn, head of the Migrant and Refugee Rights Centre.

Infiltration by alt-right individuals have become increasingly sophisticated over the past year while the recent attack on Sinn Féin TD Martin Kenny’s car is yet another indicator of how right-wing extremism has taken hold in Ireland, she said. “We thought this was happening elsewhere in Europe but it’s here in Ireland now. These are highly organised individuals and they’re hijacking this debate.”

The protests are having a huge effect on asylum seekers who are left “traumatised and deeply disturbed”, added Ms Finn.

Mr Mfaco said the women due to be housed in the Achill Head Hotel contacted Masi after seeing news reports of the protests. “The women are anxious now . . . It’s frightening to be an asylum seeker and Ireland is a new country for them. Then they read news headlines where they’re called welfare scroungers.”

Edan McHugh, a member of the Achill Says Welcome group, said the majority of people on Achill Island are welcoming and believes had the Government approached the community from the outset they would not have experienced opposition.

Rumours that spread following a post on the Yellow Vest Ireland – Mayo Facebook page that “80 economic migrants” would be “dropped” into the community created fear and distrust among locals, he said. Support from external groups, including people from Oughterard, followed quickly.

“The way the Department of Justice is handling this helps no one,” said Mr McHugh. “It would have been much smoother with political leadership and a proper introduction.”

It’s understood the “Achill says No to inhumane treatment of asylum seekers” Facebook group was set up by people not from the island. The moderators of the group did not respond to a request for interview but posted on Friday that they would continue their silent protests. Protesters outside the centre, who continued their demonstration on Friday, have said they are not opposed to having asylum seekers in their community but do not agree with the lack of consultation from Government.

Minister of State for Immigration David Stanton called on protesters to “stand down” and help provide accommodation for asylum seekers. “People should be putting on the green jerseys and helping people, not the yellow jackets to frighten people away. We can’t put people in centres where protests are going on outside. These people are already vulnerable, they need somewhere they feel safe.”

In light of recent opposition to centres, an interdepartmental group has been established to review the asylum system while an independent group will examine longer-term approaches over the coming year, said Mr Stanton. He added that consultation with communities would continue to take place as soon as housing agreements were confirmed.