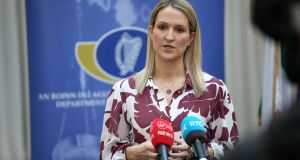 Rape victims will be treated with “dignity, respect and support” while perpetrators will be reported, charged and punished, Minister for Justice Helen McEntee has said.

The publication of the Department of Justice’s strategy, Supporting A Victim’s Journey, was described on Wednesday as a “sea change” in the State’s response to sexual violence.

Speaking at the launch of the report, Ms McEntee said it was “simply not good enough” that less than 10 per cent of victims reported sexual assault or rape to gardaí.

The focus of the 86-page strategy, she said, was “very much on the victim and examining how we can ensure a victim feels empowered to come forward first and foremost . . . that they feel supported . . . that they have trust in the system itself and also those who work within the system.

“By doing all this we are sending a very clear message to perpetrators of this crime, ‘You will be reported, you will be charged and you will face repercussions’.”

The strategy accepts all of the recommendations of barrister and legal academic Tom O’Malley SC in his review, published in August and compiled in the wake of the 2018 Belfast rugby rape trial.

Among the measures already under way is specialist training for judges, lawyers, solicitors, gardaí and all public servants likely to engage with rape or sexual assault victims. This will include education on consent and on the enduring impact of sexual violence on a victim.

Legislation will be brought forward by the end of the year to provide for pre-trial hearings, during which all matters prosecution or defence intend to bring to trial will be examined. This could include the victim’s past sexual history or demeanour at the time of the crime. In such instances the victim will be entitled to legal representation, including at trial, on this issue.

Ms McEntee said what a victim wears or where they were at the time of the crime should have “no bearing” on the question of a sexual assault.

“We do have very strict laws around that and obviously if there is any kind of questioning it does have to fit to very strict criteria . . . If this is an area that the defence is going to raise [we will ensure] there would be separate legal representation for the witness.

“What I cannot do is dictate what a judge may or may not accept, what a prosecution or defence may put forward. But what we can do is, where it is allowed, is ensure the victim is supported at every step along the way.”

Groups working with victims and survivors broadly welcomed the strategy, though warned it was “not a panacea”.

Caitríona Gleeson, programme manager and spokeswoman for Safe Ireland, which represents 39 domestic violence services, said the victim-centred underpinning was a “sea change in statutory and court responses to the experiences that countless victims may have had over the years”.

Noeline Blackwell, chief executive of the Dublin Rape Crisis Centre, said the reforms “must happen swiftly” and welcomed the fact the Minister would chair the strategy’s implementation.

“The plan is itself not a panacea. Implementation is key.” Commitments that should be start immediately included specialist training for legal professionals, provision for a court accompaniment service for victims, and, free legal advice to all victim regardless of whether a prosecution is taking place.

Third man jailed over failure to give undertakings to stay away from farm 16:46
Hotels, retail, hairdressers, gyms, churches to open next Tuesday, followed by restaurants and gastropubs on Friday 17:01
Ex-TD seeks orders against Facebook and Twitter over allegedly defamatory posts 16:00
Forget Black Friday, welcome to Green Friday - 30 Irish retailers with great deals 15:57
Garda honoured for rescuing woman from fast current in river 15:26

1 Hotels, retail, hairdressers, gyms, churches to open next Tuesday, followed by restaurants and gastropubs on Friday
2 Forget Black Friday, welcome to Green Friday - 30 Irish retailers with great deals
3 Exiting Level 5: What will reopen, when will it happen and when will we know?
4 Child (4) stranded on Luas platform when separated from mother, court hears
5 Covid-19: Level 5 restrictions ‘should stay until each county has zero cases’
Real news has value SUBSCRIBE