‘They struggle at this time of year anyhow, with the days getting shorter’ 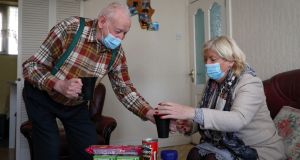 Tony Dunne (80) feels “very lucky”. He has a niece in Co Wicklow who keeps in touch with him in Dublin’s Pimlico, and a nephew in the Liberties. On top of which he feels “really fortunate” in his neighbours.

“I am spoiled,” he says, recalling how helpful they were during last spring’s lockdown. “They get anything I want: food, groceries, the TV page in the paper.”

His wife Lily (Elizabeth) has been in a nursing home for more than nine years. She has Alzheimer’s, and their son is in Brighton, England, with his family.

He knows that under the Level 5 Covid-19 restrictions he is allowed share a support bubble with another person, but he has not asked anyone yet.

There is one neighbour who is great company. “It’s not like that. I’m not a dirty old man, but I’d be very reluctant to ask her.” She has an elderly relative and might already be in a support bubble.

Spokeswoman Deborah Costello says many of the people they engage with are “so despondent and struggling” as they face into Level 5 restrictions. “They struggle at this time of year anyhow, with the days getting shorter” she says.

Since the pandemic arrived their routines have been disrupted and this continued even after the initial lockdown was relaxed.

“One lady I know just won’t go outside the house. It even upsets her to see two or three people together as it reminds her of her how lonely she is,” says Ms Costello.

Such “loneliness knows no boundaries, and is as prevalent in affluent as in poorer areas. All their social lives have been disrupted by Covid.”

Volunteers make regular phone calls to older people and ensure they have all the food and groceries they need, delivering up to 200 hampers a month, double the pre-Covid figure.

A book programme has been started by Friends of the Elderly to make sure people have plenty to read.