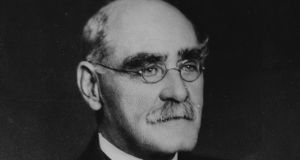 Known unto God is a phrase engraved on the gravestones of over 200,000 soldiers who died in the two world wars and who were never identified. The words were suggested by Rudyard Kipling (above) who worked for the UK War Graves commission. Photograph: Keystone View Company/FPG/Archive Photos/Getty Images

Known unto God is a phrase engraved on the gravestones of over 200,000 soldiers who died in the two world wars and who were never identified. The words were suggested by Rudyard Kipling who worked for the UK War Graves commission. He may have been influenced by the loss of his only son John in the 1915 Battle of Loos. He was reported missing presumed killed in action but not identified.

As time passed these nameless soldiers were forgotten but not by those they left behind. We get a sense of their grief from the distress of the women who discovered the empty tomb on the first Easter morning: “They have taken away my Lord and I know not where they have laid him.” There are people among us who silently grieve today for loved ones who have been “taken away” and live with the awful emptiness of not knowing. All Souls’ Day (Monday) is a reminder that their precious ones are not forgotten; they too are known unto God.

A reading for tomorrow, All Saints’ Day, from the Book of Revelation gives a picture of the heavenly court – “a great multitude that no one could count, from every nation, from all tribes and peoples and languages, standing before the throne and before the Lamb, robed in white, with palm branches in their hands.”

That vision inspired the well-known African American spiritual When the Saints Go Marching In, which before it became a jazz classic was a Christian hymn written in the early 1900s. The art historian, Neil MacGregor, points out that it is not just about the next life: “Oh, When the Saints is of course a song of the Last Judgment, of the end of time, when sun and moon shall cease to shine, and a new world of justice and love will begin. But it is also very much a song of this world, of now, and it’s no surprise that it was popular with civil rights marchers of the 1960s, for it’s a hymn of hope, a song of community, social and spiritual, that promises a glorious togetherness, in which we all hope to find our place.”

St Paul uses the word saint as a form of address in his writings. To the Romans he writes: “To all God’s beloved in Rome, called to be saints” and to the Philippians: “To all the saints in Christ Jesus . . .” Clearly, he is speaking of people who are alive and active in the church and wider society. This reminds us that saints are here and now people but who, as Archbishop Michael Ramsey suggests, special: “It is not being virtuous: the Pharisees were pretty virtuous, and they and their virtues needed conversion. It is not doing good that makes a saint: he often does do good, but so do many people whom you would never call saints. It is not the practice of religion which makes a saint . . . our religion, like every part of us, needs converting. No, the saint is one who has a strange nearness to God and makes God real and near to other people.”

The saints live and walk among us. Some are formally recognised and honoured within their own traditions when they die but the list is surely incomplete because many go unrecognised or are considered unfit by man. Ralph Vaughan Williams who composed the music for one of the great hymns for All Saints’ Day, (For all the saints), named the tune Sine Nomine – meaning without a name – his tribute to the saints unknown to man but who forever are known unto God.