‘We’re not all meant to be the same’: Eileen Flynn, who is the first Traveller woman in the Oireachtas, says 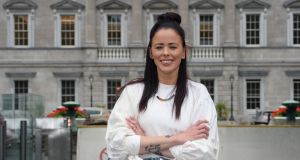 Racism and hatred towards the Traveller community is “normalised” and “very acceptable” in Ireland, a recently-appointed senator has said.

Eileen Flynn (30), the first Traveller woman in the Oireachtas, compared the struggle for equality within the community to those protesting in the global Black Lives Matters demonstrations.

“In Ireland today, even look at Black Lives Matters, racism and hatred is actually so acceptable, and it is very acceptable to be racist and discriminatory towards the Traveller community,” she said.

“It is okay to be racist towards them, that’s fine. It seems part of Irish society — not everyone in Ireland — but it is so normalised to make comments towards the Traveller community, traveller culture, education and our language.”

Launching Traveller Pride Week 2020, which has gone online this year because of the coronavirus restrictions, Ms Flynn said the community has “come a long way” in recent years, but is “still trying to find our place in society”.

As part of that process, Travellers need to accept diversity within the community, including those who are gay, have disabilities or who marry outside the community, she said during an online discussion to mark the start of the programme of events celebrating Travellers’ contribution to Irish life.

Ms Flynn said she is “seen as less” among some within her community because of her pro-choice views, for example.

“Society already makes us feel less — getting access into education, even into shops, pubs and clubs — so we shouldn’t be making each other feel less as a community of people.

“We’re meant to accept each other. We’re not all meant to be the same.”

She added: “I find it really tough that the whole 40,000 Travellers in Ireland all have to be the same as each other or if not, we are less.”

Patrick Reilly, a mental health worker with Pavee Point, said there has been a “big shift” towards accepting diversity among Travellers in recent years, but societal stereotypes about the community remain.

Travellers “want to work, we want to be in the mainstream, we want Travellers as doctors, solicitors, working in local authorities. Why not?” he said.

“I have seen young Travellers come to me, saying we can’t get work experience, let alone work,” he said.

“And that is impacting on younger Travellers. I have seen Traveller girls getting brilliant Leaving Cert results, and now that they can’t get work, their younger brothers and sisters are saying ‘well, my sister, my brother got good Leaving Cert results and can’t get work, what’s the point in staying in school?’, and it is damaging our young people.”