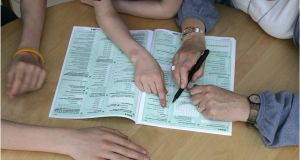 A family fills out a census form in 2011. Photograph: Dara Mac Dónaill

Next year could see the last “traditional” census involving thousands of enumerators travelling the country to hand-deliver and collect questionnaires, under options being considered by the Central Statistics Office (CSO).

A CSO paper on the future of the census shows that while some form of survey may continue, online data collection, as well as the use of massive databases of public information, are being considered as the State approaches the centenary of the first census taken after Independence.

A spokeswoman for the CSO confirmed it is “currently exploring several options for the conduct of censuses post-2021 and this includes the potential of running online census and also integrating administrative records into the census process”.

According to the working paper, released under the Freedom of Information Act, “census-taking across the world has gone through enormous change as methodological and technological advances are increasingly adopted by census-taking countries worldwide and new data sources become available.”

In time, according to the working paper, some models based on using public data sources may “ultimately perhaps replace the need for comprehensive primary data collection from every household in the State”.

While the next scheduled census, in 2021, will be conducted in the usual way, the paper assesses several options for 2026, which will be 100 years since the first census in the State.

These include a “multi-mode field operation”, which could include an online option to collect data “in addition to hand delivery and hand collection for those who choose not to respond electronically”.

An “administrative census” is also under consideration, which “relies on harvesting existing data sources rather than primary data collection from every household”. Such an approach would build on work already being done by the CSO’s administrative data centre.

According to the paper, the centre has been developing a “personal activity register”, which is compiled from a range of administrative files, including P35 forms, driver licences and child benefit forms. This could be used alongside other State databases such as the PPSN (personal public service number), Eircode and unique business identifier numbers during the census process.

A combined approach, also discussed in the paper, could see a full survey undertaken but would most likely involve a “large sample survey” done every five years to collect data unavailable from such sources, followed by “grossing this attribute data across the whole population”.

The report notes that “it is important for planning and resourcing purposes that a decision is made in 2020” regarding the form of the census to be undertaken in 2026.

The spokeswoman said the CSO will focus on maintaining confidentiality and delivering high-quality statistical outputs “which have been the key principles of previous censuses”.

“CSO is mindful of the strong connection people have with the traditional census, and a public consultation will be held before decisions about the future direction of the census are taken.”