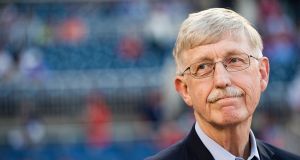 Dr Francis Collins: one of America’s top scientists, he insists that “belief in God can be an entirely rational choice, and that the principles of faith are, in fact, complementary with the principles of science”. Photograph: Patrick McDermott/ Getty Images

It was a relief when travel restrictions were eased, and it was possible to get out and enjoy the countryside. Many, including those who would not regard themselves as religious in a formal way, sense that there is something deeply spiritual about the amazing and beautiful world we live in. Albert Einstein said: “Look deep into nature, and then you will understand everything better.”

Christians, and people of other faiths, believe that behind the beauty of nature there is a supreme beauty which evokes the response that we call worship. The hymn How Great Thou Art makes the point: “O Lord my God! When I in awesome wonder/ Consider all the works thy hand hath made . . . then sings my soul . . .”

Looking back on his life’s work, Sir Alastair Hardy, one of the great marine biologists of the 20th century, said: “Just occasionally I became so overcome by the beauty of the natural world that for a moment or two I fell to my knees in prayer.”

There are of course people, including scientists, who don’t see things quite the same way.

In 1972 Sir John Templeton, the American-born British philanthropist and committed Christian, established the Templeton Prize to be awarded to persons who demonstrate “the insights that science brings to the deepest questions of the universe and humankind’s purpose and place within it.” In the past the prize has been mainly awarded to individuals from the world of religion, such as Archbishop Desmond Tutu, Mother Teresa and the Dalai Lama. This year, however, it was awarded to a scientist, Dr Francis Collins, for “his commitment to challenging the idea that science and religion are at odds”. Collins is no ordinary scientist. He is in fact one of America’s top scientists, having directed the Human Genome Project to completion. He is currently in charge of his government’s biomedical and public health research efforts, including the effort to find and develop a vaccine to prevent Covid-19. He sees the award as recognition of his efforts to bridge the gap between religion and those he describes as the atheistic science community. In his book The Language of God, he insists that “belief in God can be an entirely rational choice, and that the principles of faith are, in fact, complementary with the principles of science”.

For him, faith is intensely rational, believing that if we decided that the only things worth believing in or accepting are things that can be measured by science, then we have ruled out a whole list of important questions. He says that some scientists practice “scientism” which takes science to places where “science does not belong”.

Tomorrow’s readings take us into some of those places, reminding us that although we live in a wonderful world, human behaviour is a problem.

Genesis tells how Esau sells his future for his immediate gratification to his brother Jacob, who then goes on to deceive his father about his right of succession. This reminds us that we are endlessly faced with choices – what to do in our relationships, with our money, our neighbours, not forgetting our responsibilities as citizens.

In the Gospel reading, the parable of the sower, Jesus takes a lesson from nature to remind us that choices cannot be avoided. For example, opting for “the cares of the world and the lure of wealth” – the choice of many today – has unfortunate consequences as we are realising. In the epistle reading, St Paul points us beyond material things “to set the mind on the Spirit (which) is life and peace”.

A final thought about the relationship between science and religion and the material and the spiritual. Louis Pasteur, the 19th-century French biologist, microbiologist and chemist discovered the principles of vaccination on which our hopes depend for a defence against the Covid-19 virus. He was quite dismissive of the atheistic view of the universe: “Posterity will someday laugh at the foolishness of modern materialistic philosophy. The more I study nature, the more I am amazed at the creator.”