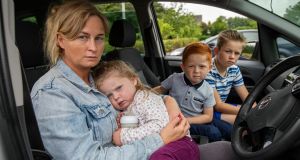 Roseanne Joyce with three of her five children – Johanna Rose, David and Danny – in the car they live in outside the offices of Tipperary County Council in Nenagh. Photograph: John D Kelly

A Tipperary mother says she has been sleeping in her car with her five children since last week because she cannot get emergency accommodation.

Roseanne Joyce (37) has been told by Tipperary County Council there is no emergency accommodation and has advised her to return to her parents’ home in Nenagh until she can source private rented accommodation, with the support of the housing assistance payment (HAP).

Ms Joyce and her parents say, however, she can no longer stay at the three-bedroom house, where she has been since February, due to overcrowding.

“As well as my parents I have two sisters there and a nephew. There was 11 of us there – five adults and six kids – so you can imagine the strain and pressure we were all under,” says Ms Joyce.

She and her children, aged between three and 16, had returned from London, where they had been after the break-up of her marriage in July 2018. Before that they had lived in local authority housing in Shannon, Co Clare. She is repaying rental arrears on that house to Clare County Council.

On their return, Tipperary County Council approved Ms Joyce for HAP. She has been seeking rented housing since, and is allowed pay up to €720 per month for a three-bedroom home under the HAP limits.

“My mother and father, they minded us for five months but they are not young. It caused a lot of problems to be honest, especially with the kids, so many of them. The queue for the bathroom alone. There was a massive row and I left on July 1st.

“I came here with my children,” she says, speaking to The Irish Times in the council offices’ carpark in Nenagh. “They knew where I was living and I explained I’d had to leave. I said I needed somewhere, a hostel or something. I just need somewhere until I find a HAP house. They said there was nothing they could do.”

She shows blankets folded in the boot of her car, a blow-up mattress and four-man tent. “I couldn’t figure out how to work the tent, and it’s been too wet. I was just going to find a field and put it up.”

They slept in the car, she says, last Wednesday and Thursday, pulling in to different locations each night.

“I sleep in the driver seat. My oldest daughter sleeps in the passenger seat. David (5) and Danny (9) sit in the back seat with Joanna Rose (3) in her seat.” Thomas (13) sleeps in a third seat at the back. She has been washing in garage and council bathrooms, she adds.

On Friday, gardaí were called to the council where she had spent the day with the children. “The guards were very nice. They rang around looking for somewhere for us. In the end, my sister said she’d take us just until Monday.”

Gardaí said they could not comment on an individual case.

Her sister, Breda Quilligan, said she agreed to to take them in, “under the circumstances . . . but I am in a tiny, upstairs, two-bedroom apartment with three kids. Roseanne had to sleep on clothes on the floor. It’s too hectic here.”

Their mother, Christina Harty, confirmed Ms Joyce and the children had been with her and her husband “since early February”.

“There were 11 of us in a small house all through the lockdown. The house was too full of kids and my husband is a sick man.”

She added: “I hope she gets some help from the council because she can’t come back here and there’s no one else to help her.”

Ms Joyce returned to the council offices on Monday and Tuesday asking for emergency accommodation. She has not been permitted to park at the offices overnight.

Jack Griffin, development worker with the Tipperary Rural Traveller Project said the organisation had been advocating for Ms Joyce since May.

“There seems to be systemic failing, that there is no emergency accommodation in north Tipperary. We have flagged with the council that she could not stay where she was, since May.”

A spokesman for the council said there was a “dearth” of emergency accommodation across Tipperary. He did not accept the family had no option but to sleep in the car, however, and described spending her days with the children in the council car park as a “protest”.

He said the council’s homelessness officer had “gone above and beyond” in assisting Ms Joyce source HAP accommodation, adding a property had been identified in Cashel, 53km from Nenagh, which Ms Joyce had been advised to view.

Her children had experienced “a lot of upset” in recent months, she said.

“They are happily settled now in schools in Nenagh, and my family is here. I need to be close to them. I’m open to living outside Nenagh, but Cashel is too far away. If I take that house I’d never get back to my family.”

Though local authorities are not legally obliged to provide emergency accommodation to homeless people, under the 1998 Housing Act their general responsibilities are set out. These include to “arrange lodgings or contribute to the cost of such accommodation or lodgings for a homeless person”.

Under the Act a person “shall” be regarded as “homeless” if “there is no accommodation available which, in the opinion of the authority, he, together with any other person who normally resides with him . . . can reasonably occupy or remain in occupation of”.

Ms Joyce said the council “seem to think I have somewhere to go . . . I have never been in this position before. All I want is a room for my kids to sleep while I find us a home”.