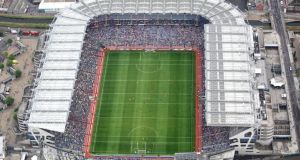 Croke Park is to host a celebration of the Muslim festival of Eid after members of a Dublin mosque requested use of the GAA venue to accommodate a large religious gathering in accordance with social distancing requirements.

Members of the Government and Church leaders have been invited to mark the event in just over a fortnight, with some already confirming attendance.

It will take place on July 31st or August 1st, as determined by the Muslim calender based on an official sighting of the new moon. The date will be confirmed on July 21st.

Among those invited are Taoiseach Micheál Martin, Tánaiste Leo Varadkar, both Archbishops of Dublin Diarmuid Martin and Michael Jackson, as well as other faith leaders including Rabbi Zalman Lent.

The event will take place on the pitch at Croke Park and will accommodate a maximum of 500 people, for social distancing reasons.

Church of Ireland Archbishop Jackson has already accepted an invitation to attend as has Minister for Children Roderic O’Gorman and Minister of State for Financial Services Jack Chambers.

Both politicians are TDs for the Dublin West constituency, as is Tánaiste Leo Varadkar, where the Islamic Centre of Ireland and its mosque is based near Blanchardstown with Shaykh al-Qadri as Imam. It is also headquarters of the Irish Muslim Peace & Integration Council which he chairs. It is organising the Croke Park event.

Shaykh al-Qadri told The Irish Times that since news of the Croke Park event broke earlier on Monday 300 Muslims from all over Ireland had registered to attend.

“The idea to approach the Croke Park authorities came from a friend,” he explained. His own immediate response was: “Wow! I hadn’t thought of that.”

Authorities at Croke Park had been “very positive, straight away, and it shows their commitment to accept diversity,” he added.

“For us Irish Muslims, it is amazing. A lot of our children have been to Croke Park and they appreciate the significance Croke Park and the GAA have in Irish history. It has helped them identify as Irish. There is no better way to express their dual identity,” he said.

GAA president John Horan welcomed confirmation of the staging of the celebration in Croke Park.

“Normally Croke Park and our other stadia would be a hive of activity at this time of the year with the staging of games but we are living through a very different year,” he said.

“We are delighted to welcome members of the Muslim Community to Croke Park to mark Eid Al Adha, an important date in the Muslim calendar.

“I believe the staging of this celebration fully supports our commitment to inclusion and a GAA welcome linked to our belief that it’s ‘Where We All Belong’.