Pandemic has shown how ‘undervalued’ frontline workers were – Higgins 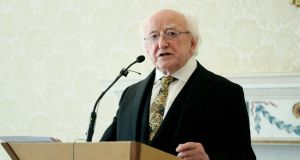 The President was speaking to the International Labour Organisation. File photograph: Maxwells

Covid-19 has illustrated how, for the last four decades, frontline workers and those providing essential services have been “undervalued”, President Michael D Higgins has said.

He has appealed for a new model of employment and social conditions.

The President was addressing the International Labour Organisation (ILO) Global Summit, entitled Covid-19 and the World of Work , on Wednesday.

The pandemic “has shown us, as if proof were needed, how the paradigm in which our economies has operated for four decades now has forced a shrinking of the space of the State, undervalued frontline workers and those providing essential services across the economy,”the President said.

“From this demonstrably failed model of economy we must free ourselves, make a new balance between economy, ecology, society and culture.

“How hugely regrettable it would be, what a lost opportunity, if, through some form of evasion or moral cowardice, we as a society were to continue a disregard for the efforts of these women and men, our essential workers, that, having paid them a fulsome tribute for putting themselves and their families at risk for us all, we were to revert to where we were before the crisis.”

A UN agency created in 1919, the ILO aims to gather employers, workers and governments to set labour standards and develop policies on conditions.

“The pandemic has forced a return to basics that none of us, including the ILO, can afford to ignore; questions such as how did we come to value so little, take for granted, essential work and essential workers?” President Higgins said.

“The task now at hand – to create a society that is more equal, one in which all work is valued, and all jobs are decent, fulfilling and secure, together with adequate social protection – is far from an easy undertaking.”

He said while it was generally safe to reference to the philosophical concept of “dignity of labour”, in which all types of jobs are respected and treated equally, it took Covid-19 to remind us of its importance.

“Let us all commit to becoming activists in an international campaign for decent work, to playing our part in the creation of a society that removes the obstacles standing between so many of our people and their personal and community fulfilment,” he said.

“Let us commit to valuing all of those heroic workers who risk their lives and their security to support us.”