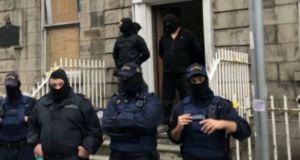 Gardaí and other masked men at the scene during an operation at 34 North Frederick Street in Dublin. Photograph: Jack Power

Housing activists have been removed from a Dublin city centre property that they had been occupying for the last three weeks.

Six people were arrested by gardaí at the scene.

While several men in balaclavas stood at the entrance to the property, more than a dozen gardaí wearing face masks blocked protesters from accessing the building.

A large number of people supporting the occupation gathered on the street opposite the building.

Six activists involved in the Take Back The City group were arrested after confrontations with gardaí on the street outside the property.

A Garda spokesman confirmed the individuals were arrested on public order offences, and were being held at various Garda stations in the north city centre area.

Gardaí appeared to brandish batons and pepper spray during the incident as they directed protesters to clear the road outside the property.

The owner of the property, Patricia Ní Greil, secured a High Court injunction on August 28th requiring the protesters to leave the building, which the occupants defied.

The men wearing balaclavas boarded up the entrance after an hour inside the property. The men would not identify themselves, or who they were acting for, when approached by The Irish Times.

The men then drove off in a white van, which had no front registration plate, and a British registration plate on the back. Shortly afterwards, gardaí outside the building left the scene, to cheers from the protesters.

The Take Back The City group has been behind a string of protest actions occupying vacant buildings in Dublin city centre, to protest about the housing crisis. The group includes activists from Dublin Central Housing Action, student group Take Back Trinity, and Dublin Renters’ Union.

Shortly after gardaí left the scene the group marched to Store Street Garda station to protest over the arrest of the six activists.

The group is also occupying a vacant property on Belvedere Court. The occupation protests began in early August when the group occupied a vacant building on Summerhill Parade, owned by Pat O’Donnell & Co Ltd Retirement and Death Benefit Plan.