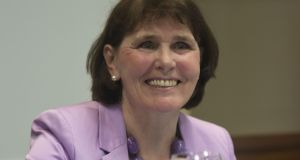 Teresa Devlin of the National Board for the Safeguarding of Children in the Catholic Church. Photograph: Brenda Fitzsimons

Ten historic child abuse allegations against six priests since 2010 have been found in a second review of child protection in the Catholic diocese of Kilmore, published on Tuesday.

The diocese covers Co Cavan and parts of counties Leitrim, Fermanagh, Meath and Sligo. The first review found there had been seven allegations made against seven other priests in Kilmore from 1975 to 2010.

The review was undertaken by the Catholic Church’s child protection watchdog, the National Board for Safeguarding Children. It was conducted in February and March and published yesterday.

While the review was generally very positive, it found that since January 1st, 1975, the total number of allegations received in Kilmore had risen from seven to 17 and against 13 priests.

Of the six new priests accused, four were living, of which three were out of ministry and one was jailed in 2014. Two of the newly accused priests were deceased. All new allegations related to incidents prior to 1991.

The 2010 review found child protection practices were “generally of a high standard”. Tuesday’s review said there was “strong leadership in Kilmore on all matters relating to creating environments that are safe for children from Bishop [Leo] O’Reilly, the safeguarding co-ordinator and the safeguarding committee.”

Bishop O’Reilly said the diocese was “very encouraged by the findings of the review and the words of affirmation and encouragement” from NBSC chief executive Teresa Devlin.

He continued that “mindful of all those who have been harmed in the Catholic Church in Ireland over the years, we renew our commitment to maintaining the highest possible standards”.

A safeguarding review of the Benedictine Community at Glenstal Abbey, Co Limerick, found one new allegation had been made against a (deceased) member of the community since its previous review was published in 2014.

It was published yesterday and conducted in May. That allegation was made against one of six members of the community accused in the 2014 review and brought the total such allegations received there to 11 since January 1st, 1975.

This latest review found the community at Glenstal Abbey “has created a very safe environment for the students and other children and young people who undertake any activities on the abbey’s campus”.

“The reviewers commended all at the abbey for “their sincere approach to safeguarding children.”

These two latest reviews were conducted on a pilot basis to test out its newly revised methodology. Next January it begins a second review of child safeguarding practices in the remaining 25 Catholic diocese in Ireland as well as at all male and female religious congregations.

In his address to the Irish bishops before he flew back to Rome on August 26th last, Pope Francis commended the work of the NBSC.

At the Dominican convent in Cabra, Dublin, he told the bishops that “in recent years, you as a body have resolutely moved forward, not only by undertaking paths of purification and reconciliation with victims and survivors of abuse, but also, with the help of the National Board for Safeguarding Children in the church in Ireland, you have set in place a stringent set of norms aimed at ensuring the safety of young persons.”

He said that “in Ireland, as elsewhere, the honesty and integrity with which the church chooses to confront this painful chapter of her history can offer an example and a warning to society as a whole.”