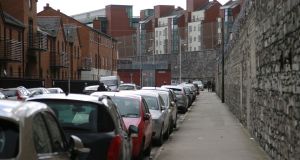 The development authority proposed by Fianna Fáil aims to build on a 2017 report by Kieran Mulvey.

A Bill to establish a statutory body charged with the social and economic regeneration of north inner city Dublin following a spate of gangland shootings in the area has cross-party support, Fianna Fáil has said.

The Fianna Fáil Bill to establish the Dublin North Inner City Development Authority, which has been proposed by the party’s Dublin spokesman John Lahart after it was devised by former councillor Mary Fitzpatrick, has passed the first stage of the Dáil.

At a public meeting to present the Bill at the Mansion House in Dublin, Ms Fitzpatrick said the Bill was intended to build on the 2017 Mulvey report.

In June 2016, Kieran Mulvey was tasked with making recommendations on regenerating the area by then taoiseach Enda Kenny after a series of shootings related to the Hutch-Kinahan feud.

His report, ‘Creating a Brighter Future: An Outline Plan for the Social and Economic Regeneration of Dublin’s North East Inner City’, was published in February 2017.

The development authority proposed by Fianna Fáil aims to implement Mr Mulvey’s recommendations, delivering social and economic regeneration, as well as bringing about improvements in the area’s physical environment.

It will also have the power to manage State-owned land in the area for possible future development, redevelopment, or conservation.

“Enda Kenny, the taoiseach at the time, came to the north inner city two years ago in response to the gangland feud that was erupting,” Ms Fitzpatrick said. “He asked Kieran Mulvey to make recommendations for the north inner city. This proposal is meant to build on that work.”

Trina O’Connor, representing the North Inner City Community Coalition, said the area has become run down due to its drugs problem.

“We started about two-and-a-half years ago when we banged down Enda’s office door, and said enough was enough,” she said. “We’ve been suffering since the 1970s when the scourge of drugs took over.

“When we knocked on his door, we asked for pilot programmes and he agreed. We’re looking for a collaborative approach, cross-party support across all divides. We urge all political parties to support this Bill. We’ve met with them all and they’ve told us they’ll support it.”