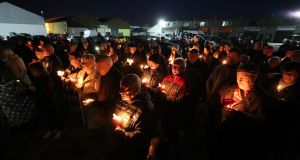 A candlelit vigil at the site of the Stardust nightclub fire in Artane, Dublin, before the unveiling of a plaque in memory of the 48 people who died on Valentine’s Day, 1981. Photograph: Niall Carson/PA Wire

“They never came home”, read the plaque to victims of the Stardust tragedy, unveiled at the site of the former Artane nightclub by victims’ families on Thursday.

The memorial, fixed to a building wall in what is now a business estate, lists the names of the 48 victims, who died nearly four decades ago.

The fire at the Stardust nightclub on the night of the February 13th/14th, 1981, remains the worst fire disaster in the history of the State.

On Thursday, Valentine’s Day marked the 38th anniversary of the fire, which killed 48 young people and injured more than 200 people, primarily from Dublin’s northside.

Friends and relatives of those killed and injured held a candlelight vigil at the site, and red roses were laid for each of the victims, whose names were read aloud.

Antoinette Keegan, of the Justice for the Stardust Campaign, said: “I lost my two sisters in the Stardust, and I also was seriously injured. I was in intensive care for 2½ weeks on life support.”

The campaign intends to make an application to the Attorney General in the coming weeks for a fresh inquest.

Inquests were held in 1982, returning explanations as to the causes of death but no verdicts.

A 1981 tribunal of inquiry had found “the most probable explanation of the fire” was arson. That finding was formally removed from the public record in 2009 following a review of evidence.

Investigations into the fire showed that a number of escape routes from the dance hall were blocked as emergency doors were locked by chains.

Ms Keegan said 38 years was “too long” to wait for justice, and families still did not have a “proper verdict”.

“My father, from the day that tragedy happened to the day he died, he always said, if this had happened in Donnybrook we wouldn’t be going through what we’re going through – one law for one side,” she said.

Retired RTÉ broadcaster Charlie Bird, who reported from the scene on the night of the fire, was invited to unveil the plaque. Mr Bird said the image of the fire “has always lived with me... the smoke was still there”.

Speaking on Thursday, Minister for Justice Charlie Flanagan said he invited representatives for the relatives to share any new evidence.

“I remain open to meeting families as I have in the past, but I have to stress there are no plans for any further inquiry,” he said. Although any request would be given the full consideration of the Attorney General when submitted, Mr Flanagan said.