Hotels in Cork, Dublin, Laois, Louth and Waterford being used as emergency housing 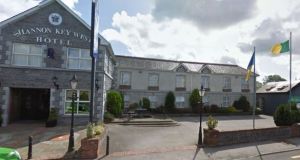 The Shannon Key West hotel in the village of Rooskey was set on fire in what has been described by local gardaí as a premeditated and carefully planned attack.

Five of the 40 direct provision centres in Ireland are currently oversubscribed, the latest figures from the Department of Justice show.

There are 693 people currently reside in the former Mosney holiday camp in Co Meath, up from 619 people in November 2018. The contracted capacity for the centre is 600 people.

An additional 304 recently arrived asylum seekers are staying in emergency beds at hotels in Cork, Dublin, Laois, Louth and Waterford due to a lack of available spaces in direct provision centres.

This extra accommodation was made available following an emergency call out by the Department of Justice for beds to meet the recent rise in demand from people seeking international protection.

Some 167 people are living in emergency accommodation in Monaghan; 66 are in Dublin; 33 in Waterford; 30 in Cavan and eight people in Louth.

An average of 50 to 60 asylum seekers are arriving in the country each week, according to the Reception and Integration Agency (RIA), which oversees the provision of direct provision accommodation.

It warned that the rising number of arrivals had placed “severe pressure” on the system, while the high number of people with permission to remain who are still living in centres and unable to find housing was compounding the problem.

A total of 5,972 men, women and children were living in direct provision centres as of February 10th. This includes 700 people who have been granted asylum but have been unable to secure housing outside the centres.

There is currently capacity for 6,156 people in direct provision, although some spaces are unavailable “due to family configurations and medical needs”, according to the Department of Justice.

Some 180 people were scheduled to move into the new centres in Moville in Co Donegal and Rooskey on the Roscommon/Leitrim border, however this move is no longer possible following arson attacks at both hotels.

On Monday night, the Shannon Key West hotel in the village of Rooskey was set on fire in what has been described by local gardaí as a premeditated and carefully planned attack.

It was the second arson attack on the hotel so far this year. An attack on January 10th caused serious damage to the premises which was scheduled to open as an accommodation centre for 80 asylum seekers.

In November 2018, the Caiseal Mara Hotel in Moville, Co Donegal, which was also set to open as a centre for 100 people, was badly damaged in a fire.

The RIA says it is working to increase capacity “as a matter of urgency” and that a public procurement process for additional accommodation will run on a regular basis throughout the year.

The Department of Justice issued an urgent call in January for expressions of interest from hotels and guest houses willing to provide emergency full-board accommodation for asylum seekers for up to six months. The RIA told The Irish Times it was “assessing the suitability” of the premises offered since January and would contact successful applicants as soon as possible.

A number of direct provision centres have closed in the past year, including two in Dublin - Georgian Court on Gardiner Street and Watergate House on Usher’s Quay.

The Clondalkin Towers Hotel was also set to close but the contract was extended until summer 2019. Once Clondalkin closes, Hatch Hall will be the only accommodation centre in the capital.

Asked if the department was moving centres out of Dublin for cost reasons, a spokesman said no hotels or premises in Dublin had responded to a call for expressions of interest.

UCD’s Dr Liam Thornton says a decision was made in 1999, when the direct provision system was first established, that centres should not be located in the capital city. “They felt locating centres in a capital would attract more people. Direct provision was never supposed to be in Dublin for fear of attracting asylum seekers.”