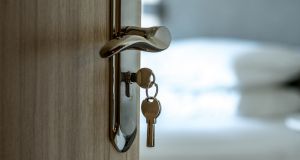 Bedroom doors are locked but not in all cases. Photograph: iStock

Ireland imprisons a relatively small number of its young people compared with many other countries.

The Children Act 2001 mandates that juvenile detention be considered as a last resort for minors, even in cases of serious or repeat offending.

As a result, the country’s only juvenile detention facility, in Oberstown, Dublin, is rarely full. In December, only 41 of its 54 beds were occupied.

However, there is another form of child detention in Ireland that is rarely spoken about – the Special Care Units operated by Tusla, the Child and Family Agency.

None of the seven boys and seven girls in these units has been convicted of a crime. But due to their aggressive and violent behaviour, they are subject to a similar security regimes as in Oberstown.

There are locks on all the doors, and many residents are secured in their rooms at night. The staff-to-resident ratio is much higher than at ordinary care centres, and the televisions are behind screens in case one of the children smashes one in rage.

Last year a Hiqa inspection found children in one of the units felt they were “living in a youth prison”. They were locked up at 9pm every night and staff had to lock and unlock several doors just to let them go to the toilet.

“The units are very robust,” Donal McCormack, Tusla’s national service director for residential services says. “They’re built to a very high spec and you’ll not get out of them too easily. But we spend most of our time trying to soften them down a bit.”

The challenge is balancing the need for security and providing a comfortable place for the children where they can stabilise their behaviour before moving back to mainstream care.

Many children “thrive” in these environments, he says, and begin engaging in their education again, something also noted in the Hiqa reports.

Bedroom doors are locked but not in all cases.

“For example, we had a child who came in six months ago who was quite frightened and threatened by a locked door. So we didn’t do it. The more restrictive you become, the more the child will kick back.”

One of the main problems faced by the special care system is assaults on staff by residents, Tusla says. Staff who have suffered attacks often end up on extended sick leave. The risk also makes it much harder to recruit new social workers in a competitive employment market.

These factors mean the country’s three special care units can only operate at about half capacity despite a large demand for places.

Sometimes children come to the units and have a “honeymoon period” before later becoming violent and attacking staff, McCormack says. Others come in with “fists flying” before calming down.

“We could have a whole week of [assaults] or a whole month of it, or you might go for six months or a year without it.”

The children detained in the Special Care Units have been judged too violent or aggressive for ordinary residential care or a foster home.

“Typically they would go through a number of foster-care placements before mainstream [residential] care, and if they can’t be managed safely there, they progress to special care,” McCormack says.

They often come from disadvantaged backgrounds, have mental health issues and are early school leavers. Some have been through the criminal justice system but not convicted.

“Often criminal courts will say, ‘I don’t want to lock him up in Oberstown, let’s send him to special care.’ Which may or may not be the right thing to be doing,” McCormack says.

“There’s no great desire to be locking children up, and I think that’s fair enough,” he says. “Having said that, the corollary is there is no consequence to their actions. If you have someone between 10 and 18 acting with impunity in the community, that’s not something that will do them any favours either.”