Pig farm protest to prompt meeting of gardaí and agriculturalists 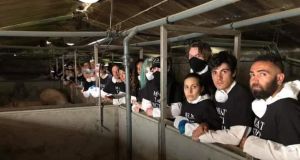 Meat the Victims animal rights protesters gathered at a Co Westmeath farm at the weekend to raise awareness of pig farming and the vegan cause. Photograph: Meat the Victims

Farmers are to meet with gardaí and Department of Agriculture officials to discuss the fallout from a pig farm “break-in” by vegan activists over the weekend.

The Irish Farmers’ Association (IFA) said its members should not be intimidated by activists who represented what it said was a bio-security risk from contamination.

About 80 activists took part in Ireland’s first “Meat the Victims” protest at an unnamed Co Westmeath farm on Saturday to both capture footage and raise awareness of the “unvarnished” operations of animal farming.

The guerilla incursion on a farm in the Raharney area, which was highly co-ordinated and secretive, would help further the growing cause of veganism in Ireland, a spokesman said.

The group said Saturday’s occupation was at all times peaceful. However, the IFA has taken the matter very seriously.

Its officials are to meet with department representatives and gardaí in the coming days “to discuss the implications and the follow-up to the break-in by vegan activists”, it said.

“For an individual farmer to be confronted with this type of intimidating activity is very distressing as it has the potential to destroy their livelihood,” said IFA president Joe Healy.

“At a time when we have a heightened bio-security risk to the Irish pig sector with the global threat from African swine fever, it is extremely reckless that people would enter a facility without any regard for proper bio-security procedures.”

The activists said they wore bio-suits and protective equipment including hoods and shoe covers.

But Mr Healy said their behaviour amounted to criminal activity and “should be dealt with using the full rigours of the law”.

“People are entitled to eat whatever they wish, but this type of behaviour is a long way from advocating a particular lifestyle,” he said.

“Those funding the operations of these activists should ask themselves how they can justify this conduct.”

The occupation will raise questions over whether it will help or hinder the rise in popularity of veganism, assisted by the threat of climate change and its links to agriculture, a bugbear of the farming community.

Dr Roger Yates, a sociologist and blogger who has been a vegan since 1979, was appointed as a liaison for the group and said they believed publicity around the campaign would have a positive effect.

“For them, this is just building on the widespread acceptance of veganism,” he said.

“I think it’s all about creating awareness of animal use, and I think they would claim that this helps the vegan cause.”

According to Dr Yates, details of the operation were kept tightly under wraps until the last minute to avoid tipping off the farming community.

Activists gathered at a park in Dublin at about 8am on Saturday where they were told to travel to Mullingar. The “inside team”, those who would enter the actual property, boarded a bus and the “outside team” travelled in individual cars.

Only two people knew the location in advance. Once in Mullingar, they were directed toward online Google maps co-ordinates leading to the designated farm which, they say, was chosen completely at random as a focal point to highlight animal rights.

A press statement released at the time of the occupation noted it was “not designed to expose “animal cruelty” on a particular farm, or to highlight a particularly “bad” farmer. The action shows routine animal rights “violations” in Ireland.

Once inside, the demonstrators occupied two pig sheds and recorded a video of the animals which was subsequently posted on social media.

Dr Yates said about five or six gardaí were onsite. A statement from the Garda said gardaí attended “the scene of a peaceful protest outside a premises”. It is understood no arrests were made.

The Meat the Victims campaign has taken place in a number of countries and the Irish one is believed to be the first of its kind here. Dr Yates said they wished to capture the “unvarnished” reality of pig farming on film.

1 Genetics shed light on origins of Irish strains of Covid-19
2 Irish doctors on getting Covid-19: ‘In 90 minutes, I deteriorated quite rapidly’
3 Europe prepares to ease coronavirus lockdowns
4 Donald Trump’s clown car administration has put the fear in all of us
5 Coronavirus: HSE reports increase in nursing home outbreaks of disease to 57
Real news has value SUBSCRIBE