Dozens of refugees at risk of homelessness as Hatch Hall closes 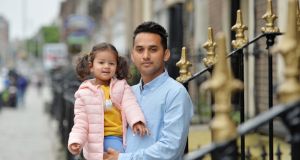 Hatch Hall, which has been used by the Department of Justice as a direct provision centre for more than a decade, will close on July 15th in preparation for its refurbishment as a five-star hotel.

Hatch Hall’s 213 residents received a letter in mid-June informing them of the centre’s closure. The letter said residents waiting for an answer on their asylum application would be transferred to another centre while the 38 residents who had already secured refugee status were advised to search for private accommodation outside the system.

Maruf Ahmed, who came to Ireland from Bangladesh in 2016, received confirmation that he, his wife and their daughter had permission to remain in the country four weeks before Hatch Hall residents learned the centre was closing.

He had read of the closure on Twitter but expected residents would be given several months notice. After his refugee status came through in May, he planned to apply for work and then find a place to live. However, when the closing date was announced, he dropped the job search and turned his focus to finding a home.

“The letter was really unexpected. I thought I had a couple of months to find a job. I knew I would be more accepted by landlords if I had work. I already felt like we were in a weaker position; we only just got our status and we don’t have travel documents yet. We felt behind in the race.”

Housing charity Depaul, which is helping families from Hatch Hall find a place to live, set up two viewings for Mr Ahmed. He never heard back from either landlord.

Last Friday, he was told by Depaul there was a space available in the Georgian Court accommodation hub for homeless families. On Saturday, the family moved out of Hatch Hall. “I could have said no but then I realised they were sending us because there was no chance for us to get a place to live.”

Now they are staying in a basement room with one bunk bed and one single bed. They have a small fridge and television but no table or chairs. “The room is very small and there’s not much light. We can’t open our window because it’s too noisy on Gardiner Street.

“We have spent three years in direct provision, the last thing we wanted was to end up in homeless accommodation, which is another form of direct provision. I want to live with dignity and privacy. It’s like we are at the lowest point in our life.”

In a statement, Depaul said it was “working tirelessly” with State and private bodies to source accommodation for Hatch Hall residents and that it had secured “appropriate move-on accommodation” for a number of families.

“Given the current rental crisis and lack of housing options we have found it equally difficult to source appropriate accommodation for those in the asylum system as well as Irish nationals within our other services,” warned the statement.

A spokesman for the Department of Justice said the Hatch Hall closure was “outside the control” of the Reception and Integration Agency (RIA) and that it was “disappointed by this development”.

He confirmed that 140 residents awaiting a decision on their application would be transferred to the Balseskin reception centre in Finglas while 32 residents had been offered accommodation in Co Leitrim.