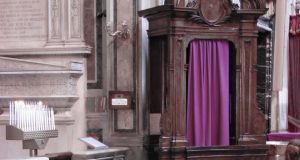 The Holy See’s Apostolic Penitentiary, a tribunal dealing with absolution and confessional matters, has said that initiatives to force priests to details what they are told in confession would violate religious freedom. Photograph: iStock

The Vatican has declared “unacceptable” any efforts by politicians or politicians to force priests to violate their sacred obligation to keep secret what faithful tell them in confession.

The Holy See’s Apostolic Penitentiary, a tribunal dealing with absolution and confessional matters, reiterated the secrecy obligation for clergy in a six-page document approved by the pope and made public on Monday.

For years now, the Catholic church has been besieged by lawsuits and other civil actions and targeted by prosecutors, including in the United States, aimed at obtaining justice for children and other victims of sex abuse by clergy and systematic cover-up by many pastors and bishops.

Some have suggested that the secrecy of confession could be problematic in tackling the problem.

“Every political or legislative initiative aimed at ‘forcing’ the inviolability of the sacramental seal would constitute an unacceptable offence against the freedom of the church, which doesn’t receive its very legitimisation from any single country but from God,” the document said.

Such initiatives would also violate religious freedom, it asserted.

In a written comment on the document, Tribunal head Cardinal Mauro Piacenza cautioned against interpreting the statement as any slackening in Pope Francis’ recently reiterated resolve to combat clergy sex abuse and cover-ups by superiors.

“It’s opportune to make clear that the text of the statement cannot and doesn’t want to be in any way a justification or a form of tolerance of the abhorrent cases of abuse perpetrated by members of the clergy,” the cardinal wrote.

“No compromise is acceptable in promoting the protection of minors and of vulnerable persons and in preventing and combatting every form of abuse, in the spirit of that which has been constantly reiterated (by Francis),” the cardinal wrote.

His statement appeared meant as a preventative parry to any prosecutor’s efforts to demand revelation of a penitent’s confession in court cases or investigations.

The tribunal document also acknowledged what it called a “certain worrisome ‘negative prejudice’ toward the Catholic church”.

It attributed such prejudice in part to “tensions that can occur inside the very hierarchy” of the church, an apparent reference to clashing factions among cardinals and bishops during Francis’ papacy, pitting more conservative camps against less conservative ones.

And it cited the “recent scandals of abuse, horribly perpetrated by some members of the clergy”.

The cardinal noted that Francis himself earlier this year called confessional secrecy indispensable, and quoted the pontiff as saying “no human power has jurisdiction” over that secrecy.

The cardinal said the tribunal felt it “urgent to recall in the first place the absolute inviolability of the sacramental secrecy, which is based on divine right and admits no exception”.

In its document, the tribunal also warned against “the judgment of public opinion” and “reckless judgments” amid the eagerness by people, including faithful and even clergy, for scandalous news. – AP