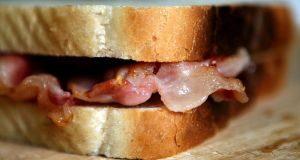 Single parents with two young children need to spend €97 per week on food in rural areas and €89 in urban zone. Photograph: Anthony Devlin/PA

Lower-income families have to spend up to a third of their income to afford adequate food, research published on Tuesday finds.

The Safefood study finds 10 per cent of the population live in food poverty – defined as the inability to have an adequate and nutritious diet due to issues including affordability and accessibility.

In general, households on low incomes tend to eat less well, have poorer health outcomes and have higher levels of excess weight and its complications.

Low literacy, lack of food/cooking skills and mental health issues can contribute to food poverty while rural areas and smaller towns may not have easily accessible supermarkets where food is more affordable than in small, local shops.

The study looks at the minimum cost of a healthy diet – focusing on “needs” rather than wants – and allowing for socially acceptable food choices, factoring in the need for social participation enabled by eating out or having guests for some food at least once a month.

It looks at six household “types” in both urban and rural settings, dependent on social welfare or on the minimum wage.

Since the last study covering 2014 to 2016, the average weekly cost of a basket of food has fallen by 4.4 per cent and now varies from €49 per week for a single adult in a rural area, to €153 for a two-parent, rural household with a primary school child and one in secondary school. Households with more teenagers will cost more.

“A minimum essential standard of living (MESL) is not a poverty standard but is a level at which no one should be expected to live below,” says the study. “Food is the most expensive category of core [minimum essential] household expenditure for all urban and most rural households [in the study]” and many households will sacrifice food where other costs, including housing, have to be prioritised.

The most expensive basic basket – for the two-parent with two children – one in primary and one in secondary – was €139 per week in urban areas and €153 in rural areas. If this family is dependent on social welfare it accounts for 33 per cent of their weekly income, or 26 per cent if they are on minimum wage.

In urban areas, these households will need to spend 30 and 24 per cent respectively.

Single parents with two young children need to spend €97 per week on food in rural areas and €89 in urban. Being in even minimum wage work makes a pronounced difference to the struggle in meeting costs.

Households in work will spend 15 per cent of their income on food in rural areas and 14 per cent in urban, but if dependent on welfare these increase to 28 per cent and 26 per cent respectively.